Visit to the Sierra of Aracena Part 1

At the end of last week, I took a journalist and photographer from Hong Kong to the Sierra of Aracena. The journalist, whose name is Ivy Ngan, is the travel editor for Next , Hong Kong’s most widely circulated general interest magazine. She is writing an article on the Iberian ham and everything related to the Iberian pig and wanted me to take her and Gary, the photographer, on my Iberian ham tour.

We started by visiting the Iberian pig farm that I normally go to. Quite a few of the sows used for breeding had just given birth and so we had a chance to see the piglets getting their feed of milk from their mothers. Below is a short video showing one mother and her offspring.

The photo below shows José Antonio, the pig farmer, holding one of the recently-born piglets.

In the final photo at the farm José Antonio has just given food to some 6-month old Iberian pigs, with Ivy and Gary to the left of the photo. 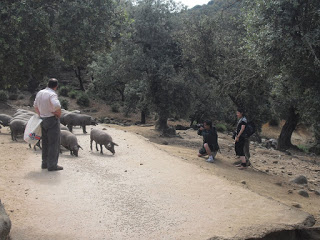 After leaving the farm, we headed to one of the most important ham curing factories in Jabugo. After seeing thousands upon thousands of hams hanging up and chorizo being smoked, we were given a lesson in ham cutting by Rafael. As well as being in charge of the restaurant area and attending to visitors, he is a “maestro jamonero”, a master ham cutter. In the short video below you can see him in action.

Tomorrow, I will continue with the second part of our trip with photos and comments on the lunch we had.
Iberian ham tour