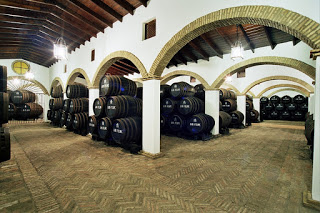 The Condado de Huelva is a Denominación de Origen (D.O.) for wine and vinegar. D.O.’s have their own governing bodies which are there to regulate, in the case of wine, things like the grape varieties that are permitted, maximum yields, ageing methods and so on.
The Condado de Huelva produces sherry-like wines, young white wines, a few reds as well as vinegars and brandies (not included in the D.O.). A D.O. for vinegar production is only shared by two other regions, Jerez in Spain and Modena in Italy. Up until the early 1980s the area supplied a lot of the sherry-style wines to Jerez which could not produce enough of its own sherry to satisfy demand. With the decline in the market for sherry the Condado wines were no longer needed in Jerez and sales dropped dramatically which eventually brought about a large reduction in vineyard area. The situation has been alleviated a little with the production of young white wines from the local grape Zalema. These can be pretty good, being light and fruity for easy drinking.
On Tuesday of this week I went to the area to look at possible places to visit for half-day tours and for an itinerary I am putting together for groups that come to play golf on the Huelva coastline. My first visit was to a winery out in the countryside that produces, principally, young white wines. I was shown around by a very affable person, but the winery really didn’t appeal to me as a place to take people. Anyway, I then set off to La Palma del Condado, a town with a beautiful old centre with a number of fantastic squares containing historic churches and fine civic buildings. My reason for going to the town was to visit Bodegas Rubio, producers of fine brandy and vinegar. Their excellent brandy, called Luis Felipe, has a bit of a story behind it. Its origins go back to 1893 when some casks containing a very good aged brandy were discovered in the corner of a cellar in La Palma del Condado. The casks were marked Luis Felipe, as they had been reserved for Antoine d’Orleans, Duke of Montpensier and son of Louis Philippe, King of France, who at the time was living in the San Telmo Palace in Seville. In fact, he died there in 1890 three years before the casks were discovered. Anyway, getting back to the present, the cellars of the company are filled with old oak casks from 500 litres up to ones with more than a thousand, all filled with brandy that is being aged using the solera system, a fractional blending system common to the western part of Andalusia and used for ageing fortified wines, brandies and vinegars. These cellars are definitely worth visiting, with of course the added bonus of tasting a superb brandy.
Leaving La Palma I headed to the nearby town of Bollullos del Condado, where most of the wineries of the D.O. are concentrated. I had an appointment with the owner of Bodegas Iglesias, who is the third generation of the same family to run the winery. The winery is situated in an old convent which gives it an added attraction. They produces a lot of sherry-style wines such as fino, oloroso and Pedro Ximénez as well as young white wine and a speciality of the area, orange wine. The base of orange wine is a sweet oloroso, 90% Zalema and 10% Pedro Ximenez. The sun-dried peel of bitter oranges is added to this wine which is aged in old oak casks for around 8 years. The result is a superb mouth-filling sweet wine with wonderful aromas of bitter oranges. No wonder the world famous El Bulli restaurant have included it in their wine list.
The owner , José Manuel Iglesias, is really enthusiastic about his winery and his wines, and as we walked amongst the rows and rows of old casks her occasionally stopped to extract wine to taste using a caña or cane for this purpose, very common in the area and also in Sanlúcar de Barrameda. It is a more primitive form of the venencia which is used in Jerez. Towards the end of the visit José Manuel took out a key and unlocked an old wooden door which led into a room with maybe 20 extremely old casks. This was the sacristy of the winery. Here were the oldest and most venerated fortified wines. He told me that there were wines here that went back to the 1920s and had belonged to his grandfather. The small amounts extracted every year are replenished with old wines of the same style. I tasted a dry wine which was something akin to an elegant palo cortado from Jerez and then a sweet Muscat-like wine. Both as you can imagine were superb. Leaving the winery I knew that this was a place that I would be coming back to with future clients of mine.
Wine tours from Seville