On Thursday of last week (30th January) I went with a friend to visit a producer of foie gras. Eduardo Sousa is his name and he is based in the town of Fuente de Cantos in the province of Badajoz in the region of Extremadura, just over an hour’s drive north from Seville. The production of foie gras is something that leads to heated debates about it being unethical and  cruel. Most people have seen images of geese with a funnel down their throats being force fed with corn. This causes their liver to grow to many times its normal size, typically 10-12 times. Well, Eduardo does things very differently. He does not force feed any geese, but instead takes advantage of the natural cycle in which the geese fatten themselves up for when they are about to migrate, which is in the month of November. His geese are wild, not domesticated birds, that have become accustomed to the presence of people. They are able to fly off when they wish to look for food but they always come back together as they live in family groups.
Eduardo drove us out to his farm and as soon as we arrived there we were surrounded by geese. The birds we saw were breeding birds that have become used to staying in the area and not flying off to North Africa. We went up a slope to the top of the farm and Eduardo started pouring some corn onto the ground to show us how quickly the geese would come. Feeding the geese with corn now and then is the way Eduardo has got the geese to except him and other people. Below is a short clip I recorded of the geese feeding.
Three to four weeks before the time that the geese  migrate Eduardo gives them corn to supplement their diet. Then, before any start leaving he comes on a dark a night as possible, and with a strong light he mesmerises them which allows them  to be captured easily. The geese are slaughtered in the most humane way possible to avoid them being stressed and affecting the quality of the meat and the liver. The livers tend to be around 450g in weight, much smaller than those from birds that have been force fed.
When we were at the farm the geese had starting laying their eggs, which can be up to 40 per bird! Below is a photo of one of the nests. 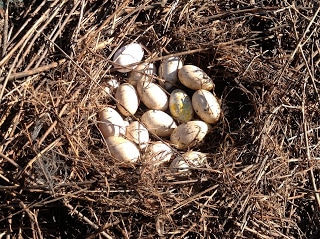 We also spotted some wild asparagus as can be seen below. 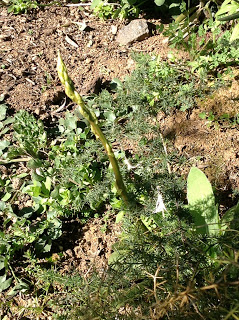 As well as producing foie gras Eduardo  has a range of patés which are made using Iberian pork products from free acorn-fed Iberian pigs. The photo below show the sign of his shop in Fuente de Cantos.

Leaving Eduardo my friend and I headed to Zafra, just 15-20 minutes from Fuete de Cantos, for lunch. Zafra has a beautiful old quarter with the parador occupying an old castle. There are also two beautiful squaresthat the town is famous for. 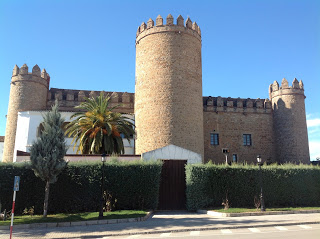 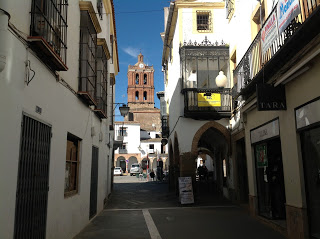 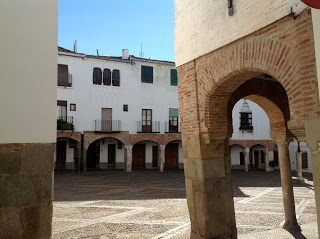