On Monday this week I ran a tour to the Sierra of Grazalema situated in the north-east of the province of Cadiz and about 1 hour 20 minutes from Seville. This beatiful mountainous area is a limestone masiff formed by the collision of the Afican and Eurasian tectonic plates during the Apline orogeny between roughly 20 and 40 million years ago. The area is a Natural Park with plenty of wildlife including Ibez goats, deer, wild boar, the largest colony of Griffin vultures in Europe, etc. The Sierra de Grazalema also is home to a rate species of tree the Pinsapo, which is also found in the Sierra de las Nieves National park near Ronda. This tree was limited to its presnet habitat by the last major Ice Age. Due to its rarity numbers of linited for walking in certain parts of teh Natural Park with a permit being necessary.

We started our tour with a visit to a traditional olive mill where they still press the olives using hydraulic presses which are over a 100 years old. When we arrived at the mill they were preparing the nets which are put under the trees when they pick olives. It appears that they will start picking next week. 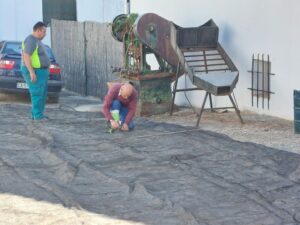 Adter visiting the mill we took a walk around the beautiful white village of Zahara de la Sierra which is listed as one of the most beatiful villages in Spain. They are just over 100 villages which are on this list which you can see here. 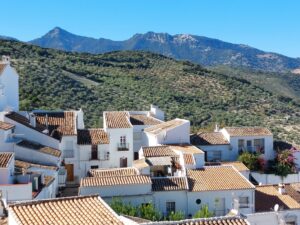 From Zahara de la Sierra we crossed over the mountains on a spectacular road to Grazalema, also listed as one of the most beautiful villages in Spain. Here we made a visit to some friends of mine who make cheese in the area. The local cheeses which are made rom both sheep’s and goats’ milk are probably the best in the south of Spain. The breeds used are local to the area, the Payoyo goat and the Grazalema Merino sheep, which is a cross between the Merino and Churra breeds. We tasted four cheeses; a semi-cured goats’ milk cheese, a goats’ milk cheese that had been covered in paprika for part of the curing process, a cheese made of both goats’ and sheep’s milk cheese and a sheep’s milk cheese. All I can say is that they were all wonderful. 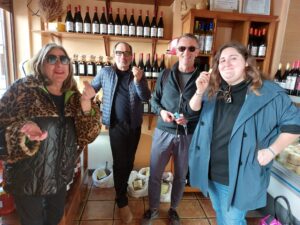