I was in Jerez three times last week and one of the things that excited me most was getting hold of a bottle of Fino Perdido, a fino sherry (naturally) produced by the company Sánchez Romate. This is a fino that is not sold in Spain! A friend of mine who worked at Sánchez Romate was able to supply me with the bottle.
The name Fino Perdido, for those of you who don’t speak Spanish, means lost fino. The reason for the name is that it is a style of fino that is not common at the moment, but waas very common over thirty years ago. It’s a fino that has an average age of around eight years, four more than the majority of finos on the market. It has also undergone only light filtering and so retains a golden colour.
The wine has quite intense aromas of yeast, toated nuts (almonds and to a lesser extent haznuts) and a hint of toffee. On opening the bottle and for the first day or two there was also an aroma of spearmint on the nose. The third day after the bottle had been opened this disappeared. This is a fino with more weight than most and is less fresh but more rounded than younger examples. It’s a fino that has made the first step towards becoming an amontillado and in my opinion is quite superb. A fantastic match for acorn-fed Iberian ham and semi-cured sheep’s milk cheese, as well as many other dishes, too innumerable to mention.
Fino Perdido is sold by the Wine Society in the UK and I saw it mentioned in the list of sherries that are sold by an Australian company, the Spanish Adquistion. 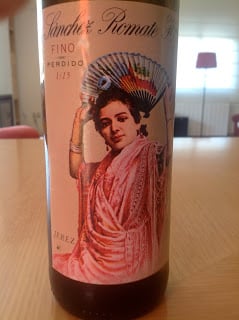