On Tuesday (17 May) we visited two wineries that are part of the Eguren group, Viñedos de Páganos y San Vicente. There are two vneyards adjacent to the first winery that produce the wines El Puntido and La Nieta. You can see them in the two photos below. 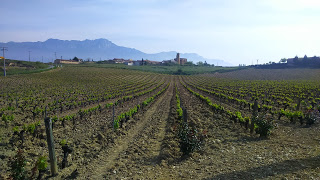 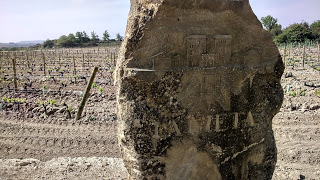 Underneath the winery there is an extensive cave system where barrels and bottled wine is kept. They have set up a sound system so that you can listen to Gregorian chant as you walk around the caves; it is something else! 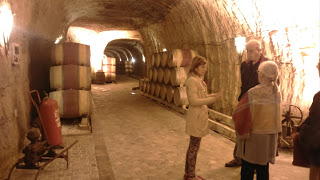 The San Vicente winery is located in San Vicente del Sonsierra, the same town as Bodega Contador. Only one wine is made here, San Vicente, from an 18 Ha vineyard called La Canoca. It is made from a clone of Tempranillo called Tempranillo Peludo which is not very common. After a tour of the winery we sat down for a magnificent tasting of 5 wines, San Vicente 2007, El Puntido 2007, La Nieta 2008, Alabaster 2008 (from the region of Toro) and Organiza 2014, a white wine. All the wines were excellent with the favourites being La Nieta and Alabaster. La Nieta is subtle and Burgundian-like with acidic fruit, amazing freshness and very fine integrated oak aromas. The Alabaster is from the region of Toro which gets hotter in the summer than the Rioja. Tempranillo in this area is known as Tinta de Toro. The grapes for this wine come from pre-phylloxera vines that are over 120 years old!! The nose on this wine is charged with very ripe fruit and is perfumed with again very fine oak in the background. On the palate the wine is enormous, silky, mineral, balsamic, even elegant. It’s an iron fist in a velvet glove. 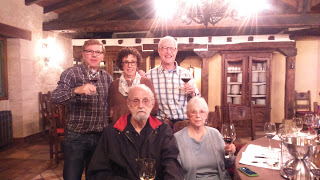 After the wonderful tasting we had lamb chops for lunch that were cooked on the embers of vine cuttings. There were absolutely delicious.
Food and Wine Tours Spain