Yesterday was our last day of winery visits in the Rioja. We went to two places in the Barrio de la Estación (train station neighbour) in Haro. Six wineries were established here in the latter art of the 19th century close to the train station so that wine could be shipped easily, especially in the beginning to France where phylloxera had destroyed most of the vines. Our first visit was to López de Heredia a winery established in 1877. I visited the winery at the end of March and wrote about it in my blog entry of 5 April which can be seen here. The visit was very much the same with the best wine we tasted being the Viña Tondonia 2004. 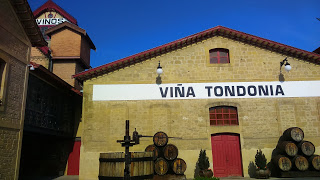 Our second visit was to the only modern winery in the Barrio de la Estación, Bodegas Roda. Irs origins date from 1987 but the winery was no completed until 2001. This winery is a complete contrast to López de Heredia, with barrels being a maximum of 3 years old with all otem being made fromFrench oak. The fermentation vats are made of oak as with López de Heredia but they are replaced every ten years. At the end of one of the tunnels that the winery has is a glass door which leads on to a sort of balcony overlooking the Ebro river. Here we tasted the wines and had a tapas-style lunch. We tasted Sela 2012, Roda 2011, Roda I 2008 and Cirsion 2010. The Sela is made from vines that are younger than 30 years old and is aged in barrels that have already been used. A very easy wine to drink with lots of cherry fruit. There are 17 plots of vines that produce wine for Roda or Roda I. Those with a more red fruit profile are used for Roda and with a black fruit profile for Roda 1. The Roda wine is lighter with aromas of ripe cherries with fine spiciness in the background and well-rounded tannins. The Roda 1 with three more years of age is more developed but is also a wine with greater complexity. The fruit is mainly plum-like with notes of cloves, cinnamon and well-rounded tannins, a very elegant wine. The Cirsion is the top wine and only a few thousabd bottles were produced. This is an intense and complex wine with lots of dark berry fruit, notes of flowers, wet earth, chocolate. On the palate it has a lot of weight and is very silky with a very long finish; a great wine. We also got to taste two wonderful extra virgin olive oils produced by the winery in Mallorca. 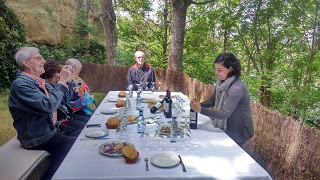 After leaving the winery we went to the wine museum at Bodegas Vivanco in Briones. If you are in the area this is a must. It’s the best wine museum that I’ve been to.
A Question of Taste Food and Wine Tours Spain