I have recently started organising half-day tours to an olive mill that is just over half an hour away from Seville, on the outskirts of the town of El Viso del Alcor. The principal olive variety that they use is Arbequina which makes light fruity olive oil.
This morning I ran the tour for three people who are staying in Seville. The mill is situated in an old hacienda and on arrival we were met by Juan Antonio, the owner. A good part of the visit was spent among the olive trees, where Juan Antonio explained all the factors that are needed to produce quality olives. In different parts of the olive grove there are boards with information expalining things such as the effects of climate and soil or the optimum time for picking the olives. Juan Antonio can be seen in the photo below next to one of the information boards. 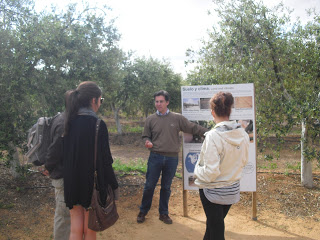 In the second photo, you can see the buds that have formed on the  olive trees and that will become flowers. Some of these will then become olives. 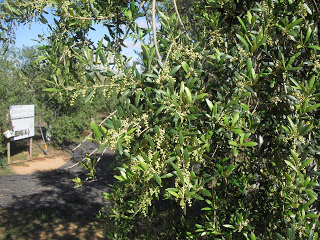 The olive mill uses the most modern methods for extracting olive oil but they have quite a few relics from the past. Below, you can see a photo of the old granite cones which were one used for crushing the olives. 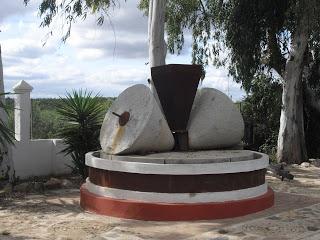 As olive oil is not being made at the moment, Juan Antonio showed us a video of the extraction process. The olives are crushed to form a paste and this paste is then  centrifuged to separate the olive oil from the solid material and from water. The olive oil which at this mill is all extra virgin is then stored in stainless tanks at a constant temperature with a layer of nitrogen above the oil. This helps to stop the olive oil from oxidising. Below is a photo of the stainless steel tanks. 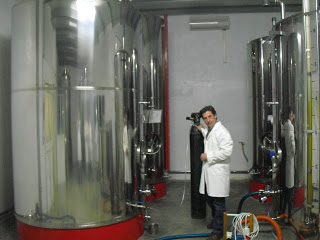 Juan Antonio then guided us through a tasting of his extra virgin olive oil. I have tasted his oil on many occasions and I think it is probably the best extra virgin olive oil produced in the province of Seville. It has aromas of banana, apple, tomato leaf and recently-cut grass. On the palate it is sweet tasting with very little bitterness and just a tinge of pepperiness at the back of the throat. We compared this oil with a mass produced one which lacked any fruitiness and had a vinegar-like aroma to it. It was like comparing chalk and cheese. We finished the tasting with a small dish of rice pudding made with his olive oil. We added a extra dash of his olive oil which had been infused with orange peel. This was a delicious way to end the visit. 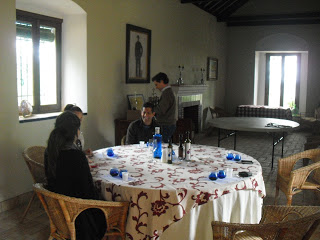