Yesterday (22 November),  I took some people on my Iberian or iberico ham tour. The months of October and November are when the free-range Iberian pigs start eating acorns which they root around for among the holm oaks and cork oaks. The idea is that the pigs gain 50 to 60 kilos in weight from a diet based principally on acorns before they go on their final journey. The acorn diet is what gives the best Iberian ham its sweet nutty taste and its extra oil content.  The hams from pigs at the farm that I go are destined for the highest classification within the Demoninación de Origen (D.O.) or appellation,  Jamón de Huelva which is one of 4 Iberian ham D.O.’s in Spain. The pigs whose hams are destined for D.O. status are tagged before they start their acorn diet. The photo below shows the tag on the ear of a pig; it’s the lower one of the two tags. Click on the photo to enlarge the image so that you can see it properly 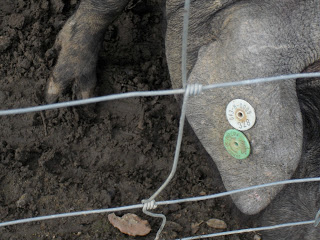 The pigs you can see eating in the photo below are going to be tagged on Sunday (25 November) and then herded up onto the hillside so that they can start their diet of acorns. 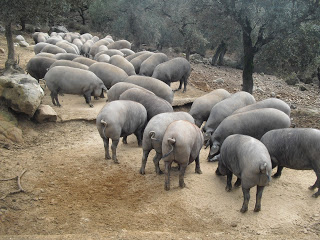 After the farm visit we headed on to Jabugo, the most famous town in Spain for Iberian ham. Gerardo, who over the years has become a very good friend of mine, showed us around the ham factory where he works. Before any ham leaves the curing cellars it is tested to see whether it is ready and also to see if it might have any defects, thus preventing it from being sold. The test involves using a implement which is traditionally made using bone from the femur of a cow and is called a “cala” in Spanish. It has a small handle which tapers into a long thin cylindrical part with a sharp point at the end. This is inserted into three points on the ham representing three different muscles. The part that has been inserted is then smelt. An experienced ham tester will then know from the aromas if the ham is ready, if it needs more curing time and if, in a worst case scenario, it is defective. The first photo below shows Gerardo inserting the “cala” and in the second he’s doing the smell or aroma test. 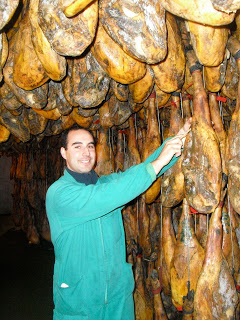 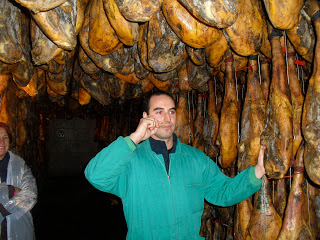 After the ham factory visit, we headed to one of my usual haunts for lunch.  Thanks to all the rain that we have been having, we were able to taste some wild mushrooms. We tasted three different types: Boletus aereus, Amanita caesarea (Caesar’s mushroom) and Lactarius deliciosus (Saffron milk cap). The photos below were taken in the kitchen at the restaurant and the mushrooms are shown in the same order as they are mentioned in the previous sentence. 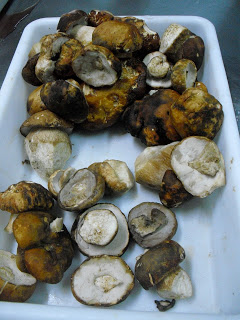 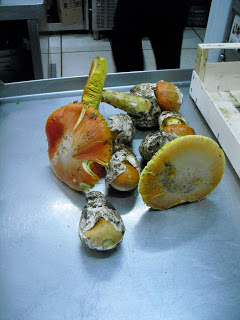 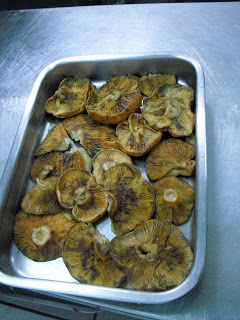 The final photo shows the dish of mushrooms that we were served. This was one of quite a few splendid dishes that we ate. 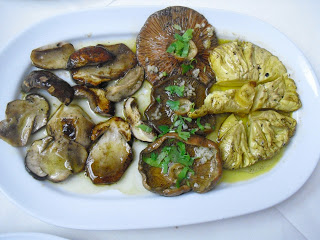