Since last writing on this blog I have been very busy, running lots of our one-day tours, organising cooking classes with chef Willy Moya, and taking people on tapas tours around Seville. I have also spent 4 days with someone from a British production company who are probably going to make a 6-part series on Spanish cuisine which will be presented by a famous chef. The person I was with was making a recce visit to do some filming, so that an initial presentation of possible content can be made before serious research goes ahead.
We started by filming in some of the best tapas bars in Seville on a very busy Saturday night with me talking about what we were eating and about the whole idea of tapas in general. The next morning we set off up into the mountains to the north-west of Seville to visit a man who breeds Iberian pigs and makes fantastic acorn-fed Iberian ham, as well as all the other cured meat products. We toured around different parts of the farm, seeing pigs of different ages. In one area, as we stood under a holm oak tree we could hear the plop of acorns as they fell on the ground; the acorn-eating season for the pigs was just starting! Below, are a few photos I took. The first shows an oak tree that is full of acorns, the second some free-range Iberian pigs rooting around for acorns. 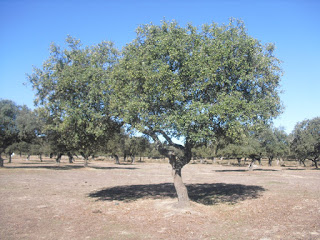 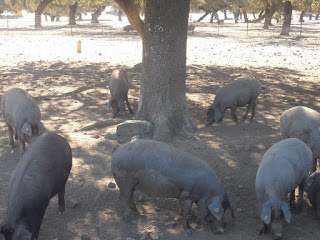 As well as looking at the world of the Iberian pig and having a great lunch at a restaurant in the town of Aracena, a usual haunt of mine, we visited my favourite olive oil producer just outside the town of Beas, in the province of Huelva. The olive oil, made by a perfectionist in small quantities, comes from 5 varieties of olive: Arbequina, Hojiblanca, Picual, Manzanilla and Picudo. The olives are processed at the optimum time for producing high-quality oil with an incredible attention to detail and absolute cleanliness. A rigourous selection of olives is made before processing to ensure only the healthiest olives are used. The result is a complex olive oil with an amazing aroma and taste that puts it on the same level as very fine wine.
On the last day of filming we went to visit a producer of the cheese known as Queso or Torta de la Serena. The area where the cheese is produced is located in the south-eastern part of the province of Badajoz in the region of Extremadura. I wrote something about this cheese and its cousin Torta del Casar earlier this year. The cheese is made from the unpasteurised milk of Merino sheep that are milked twice a day giving around just 300ml of milk per ewe! As I mentioned in my entry earlier this year the coagulating agent for the milk comes from the flower of a thistle. To be precise, what is used are the dried stamens of the cardoon (Cynara cardunculus). They are steeped in water and then removed after being squeezed. It is the liquid that is then added to the milk to curdle it. The curd that separates from the whey goes into muslin bags that are put into moulds and left on shelving, open end facing down to allow for liquid to drain off. After a few hours the cheese is taken out of the mould and turned around. This process can be seen in the photo below. The cheese is left for a few more hours before being 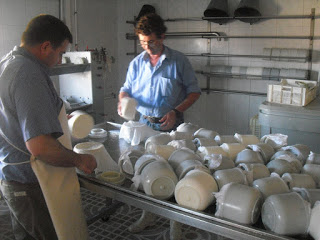 salted and put into the curing rooms where each cheese will spend around 2 months. In the photo below you can see cheeses that are curing on wooden shelving, something that is normally prohibited. What you normally see is plastic or metallic shelving for purposes of hygiene. If this was the case with the Queso or Torta de la Serena, the cheese would become a hard cheese. The bacteria that stops the cheese from going hard only does its work when the cheeses are on wood! This is absolutely amazing. Some of the cheeses are more liquid and are known as Torta de la Serena, whilst others are firmer but still spreadable. These are known as Queso de la Serena. 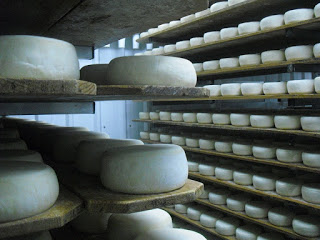