The poet laureate in the United Kingdom is named by the queen on advice of the prime minister. It is an honorary post and the person who holds it is expected to write poems for special state occasions. The post used to be a life tenure but is now for ten years. The first poet laureate, Edmund Spenser,  was named in 1591. When Ben Jonson was given the post in 1619 it was decided that he should receive a butt of sherry, around 500 litres of the stuff! This tradition has been kept up to the present day. The Sherry Institute of Spain are the providers of the sherry and the poet laureate now usually goes to the Jerez region to selct the sherries they would like. Yesterday, I took a photo at one of the wineries which shows a sherry butt that was signed by the last poet laureate Andrew Motion when he was there in 2003 to select his sherry. 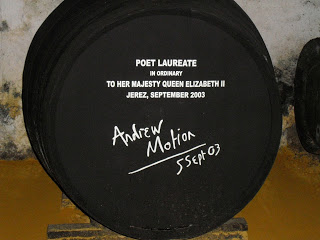