On Friday I spent a few hours at one of the olive mills that I visit observing the picking and processing of olives to produce high quality extra virgin olive oil. The firist photo below shows oilves being picked using electric combs. This is one of the best ways of picking olives as no damage is done to the olives, the branches or to the root system of the trees. 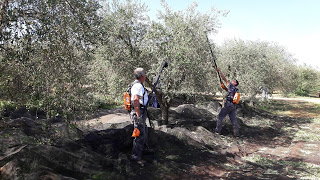 Olives need to be transported to the mill and processed as soon after picking as possible to avoid any problems due to deterioration. At the mill leaves have to be separated from the olives which is done by using a machine that blows air through the olives as they fall after being elevated by a conveyor belt. At the mill that I visited the olives are also sorted by hand. 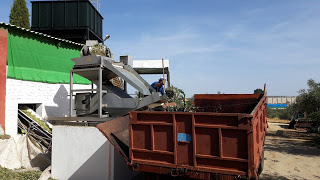 After the process the olives are introduced into a milling machine in which a hammering   action turns them into a paste. 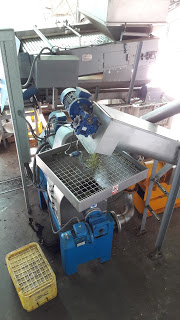 The paste is then introduced into a machine called a malaxator. Circular blades turn around mixing the paste and helping for the droplets of oil and also water to be released from cells in the flesh of the olive. This process should be between 20 and 40 minutes. If the process goes on too long the oil can start to oxidise and also increase in temperature. It is important to keep the temperature below 27ºC to avoid loss of aromatic components due to volatility. 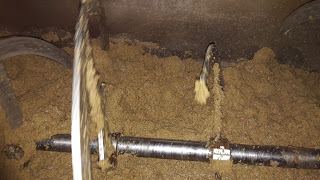 The paste is then introduced into a horizontally-axised centrifuge that spins around at about 3500 rpm. This process separates the solid from the liquid parts. It is in fact possible to separate off most of the water with the solid material. However, there will always be some water mixed in with the oil, so to separate them the liquid passes to a vertically-axised centrifuge. This time the liquid is spun at around 6000 rpm and the oil settles above the water. Pipes can then syphon off the olive oil and water separately. 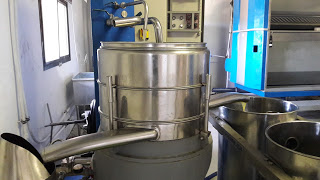 There will always be some mositure left in the oil as well as some fine particles, so ti is always advisable to let the oil settle for several weeks before doing any bottling.