Vines in the Ronda area.

Yesterday I ran a tour that combined a visit to an olive mill followed by a visit to a winery with lunch afterwards. The olive mill was just outside Zahara de la Sierra and the winery was not far from Ronda. I found it interesting to compare how advanced the vines were at the winery in comparison to the vines I saw last week at a vineyard close to Arcos de la Frontera (see last blog entry).
The vineyard near Ronda is at an altitude of around 850 metres whilst the one in Arcos is not much above 200m.  On arriving at the vineyard it was obvious straight away that growth of the vines was quite a bit behind that of the Arcos vinyard. The most advanced vines were the Merlot ones with very small grape bunches already visible as can be seen in the photo below. 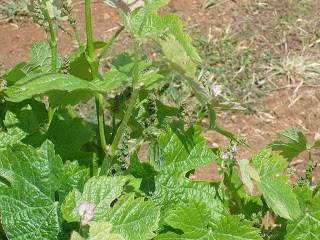 Comparing the next photo with the one I took last week across the vineyard near Arcos de la Frontera you can immediately see what I mentioned above in how much more advanced the vines are in Arcos.
The vines in the photo below are Merlot ones in the foreground and Tempranillo further back, both earlier developers in Ronda than Syrah vines, as seen in the Arcos photo. 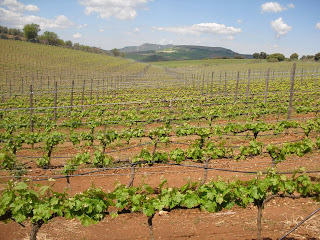