At the end of September I ran a five-day wine tour to Galica in north west Spain. This is the third tour I have run for a group of 3 British men who I now consider to be friends rather than clients. We started and finished in the beautiful town of Santiago de Compostela which is becoming more and more well known with so many people walking the “camino” or one of the “caminos”, as there are quite a few different routes to get there.

Galica has 5 wine appelations, of which we visited four. The area is most well-known for white wines, especially those made from the Albariño grape and more recently the Godello grape. There are, however, some great red wines, as well, from all around the area, with my favourites being those from  Riberia Sacra which I’ll talk about in another post.

Our first wine day was to the Rias Baixas area, which has made its name with wines made principally from the Albariño grape. This appelation has five subdivisions and we visited the Val do Salnés area where over 70% of the vineyards are situated. Our first visit was to Pazo de Señorans. A “pazo” is a manor house and the one here dates from the 16th century. Outside the house is a very large “horreo”, a raised construction for storing food to protect it from animals, especially rodents, and to reduce problems of humidity. 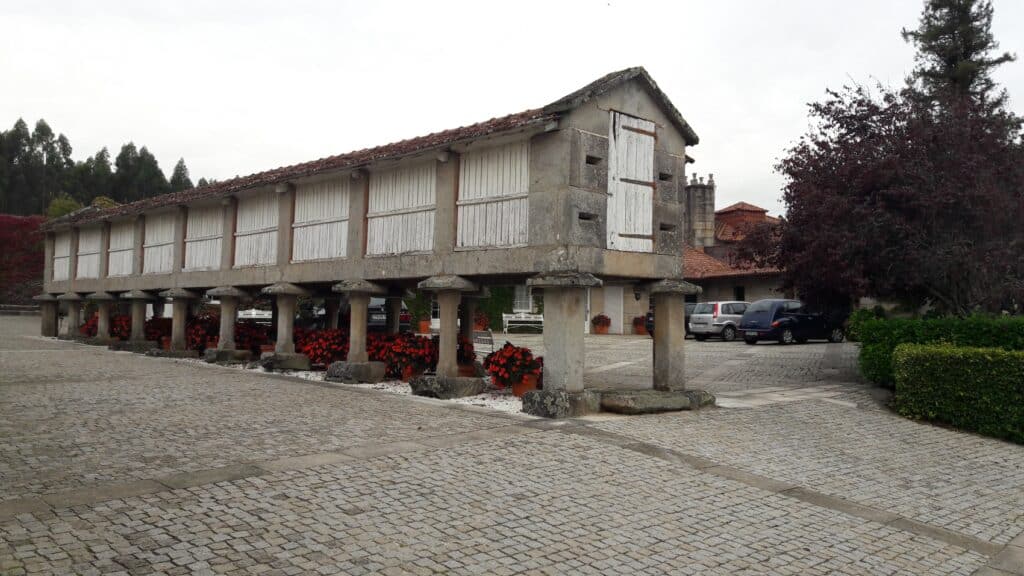 The vines in this area are grown on trellises with granite supports. This helps to reduce problems with humidity as air is able to circulate helping to dry the leaves and grapes. It can rain quite a lot here so this system helps a lot. 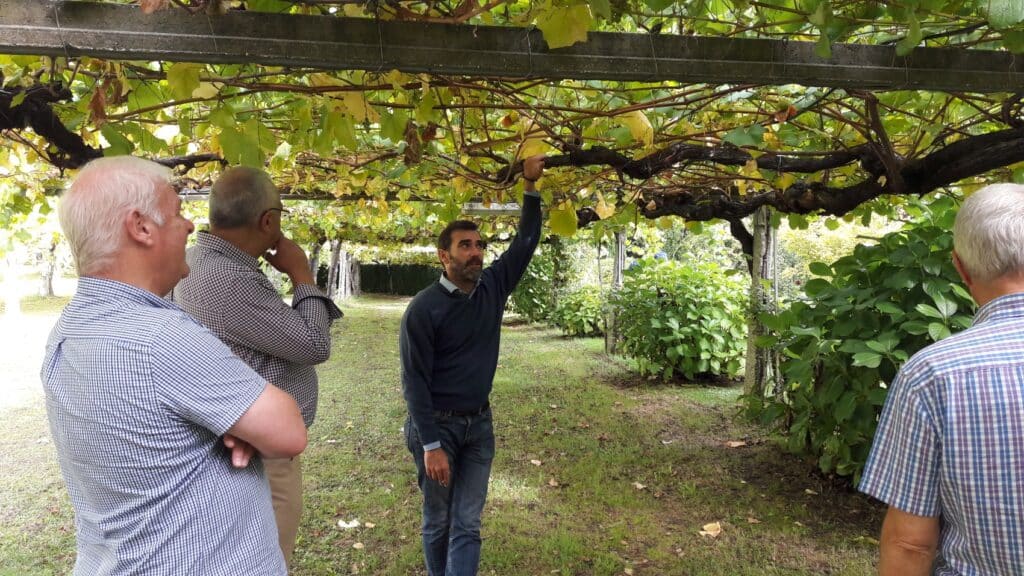 After visiting the “pazo” and the wine making facilities we sat down to a tasting of 3 wines and also some “orujo”, the Spanish equivalent of grappa. I have been drinking Pazo de Señorans wines for more than 25 years and they are among my favourite albariños. In the tasting I was very impressed with their Selección de Añada from 2009. This wine spends 30 months on the lees in stainles steel tanks. This gives it extra complexity and a more weighty mouth feel. It’s also a wine that will probably improve over the next few years. 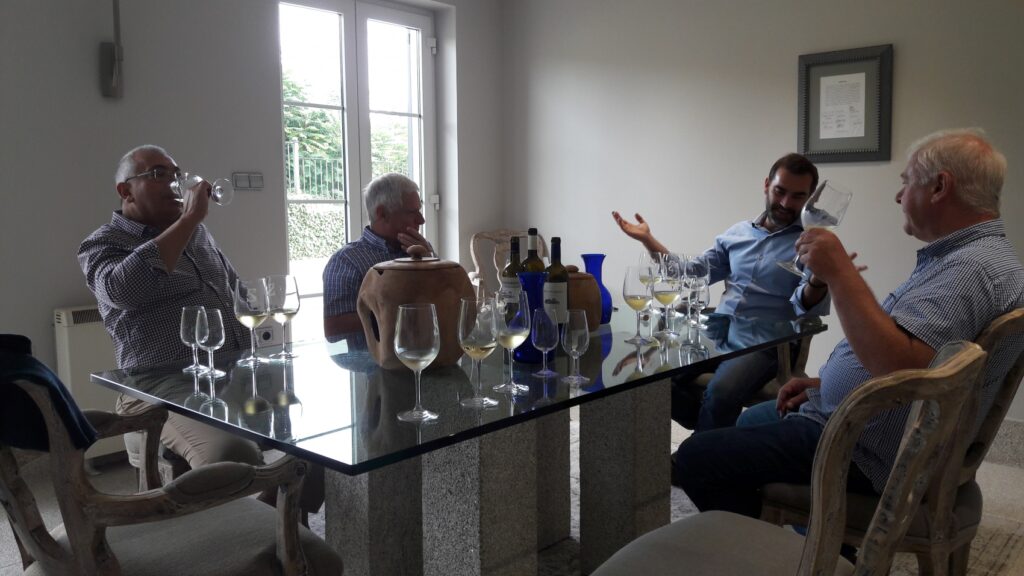 After a short drive we arrived at the second winery,  Pazo Baion, The stunning manor house building here dates back to the 15th century and has an adjoining old milking shed as well as a separate winery building, all in a wonderful setting. The present owners bought the estate from the government after the previous owner was imprisoned for drug smuggling! 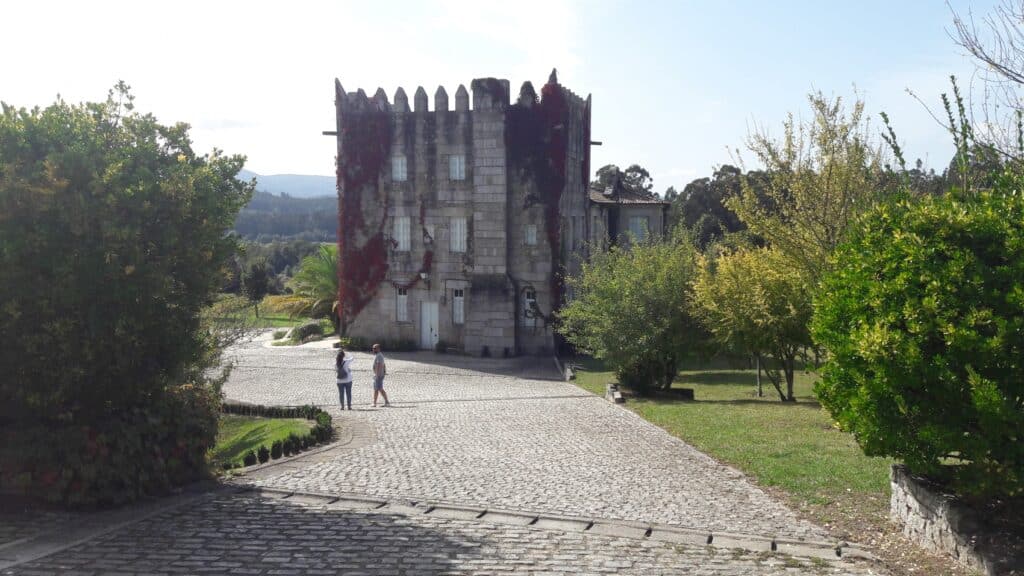 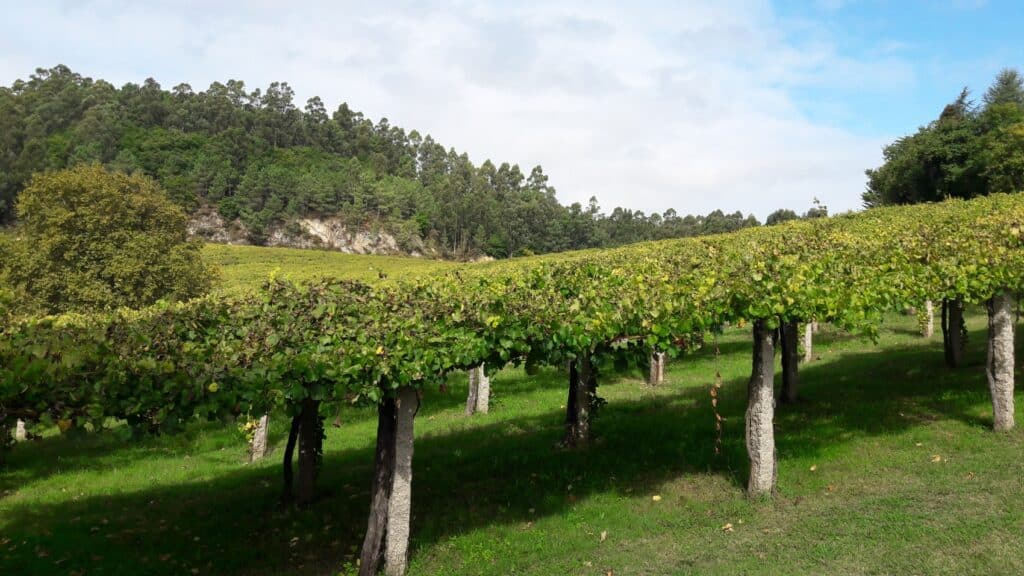 At the moment the estate produces one wine, although we tasted some others from another winery under the same ownerhip. The Pazo Baion 2016 impressed me the most though with its floral, pear and citric aromas. On tasting the wine I thought it would benefit from a few years in the bottle, so by 2019 it should be even better. 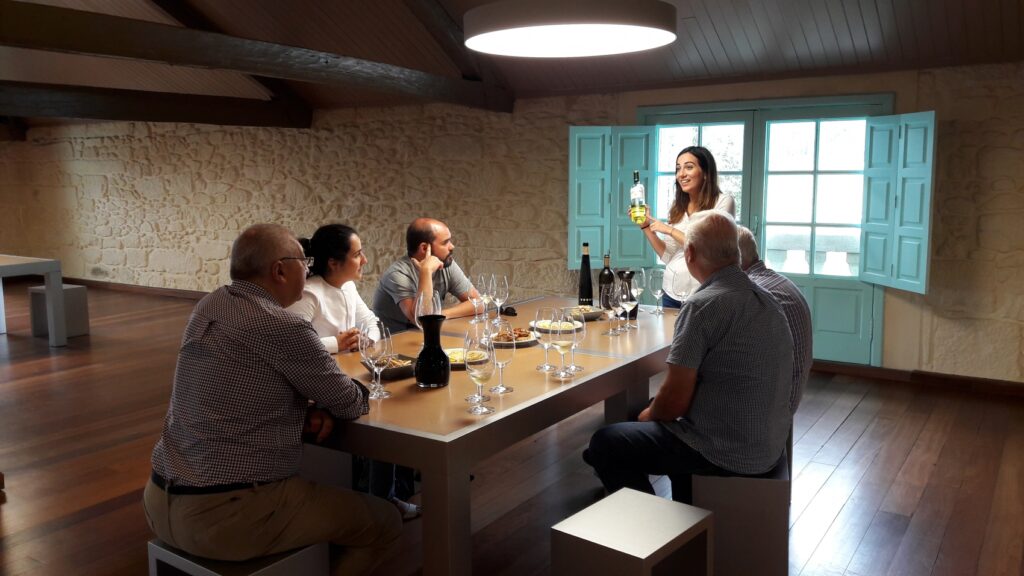 We then headed off to Cambados for lunch. This charming town is where the headquarters of the Rias Baixas appelation are located. It’s also home to quite a few fine restuarants. We ate at A Taberna do Trasno and had a wonderful seafood lunch, including octopus and cockles. It was then off for our final winery visit of the day to Bodegas Palacio de Fefiñanes. the oldest winery in the area situated  in an old palace that dates from 1647. Some of the vines next to the winery are prephylloxera, so they are well over a hundred years old! 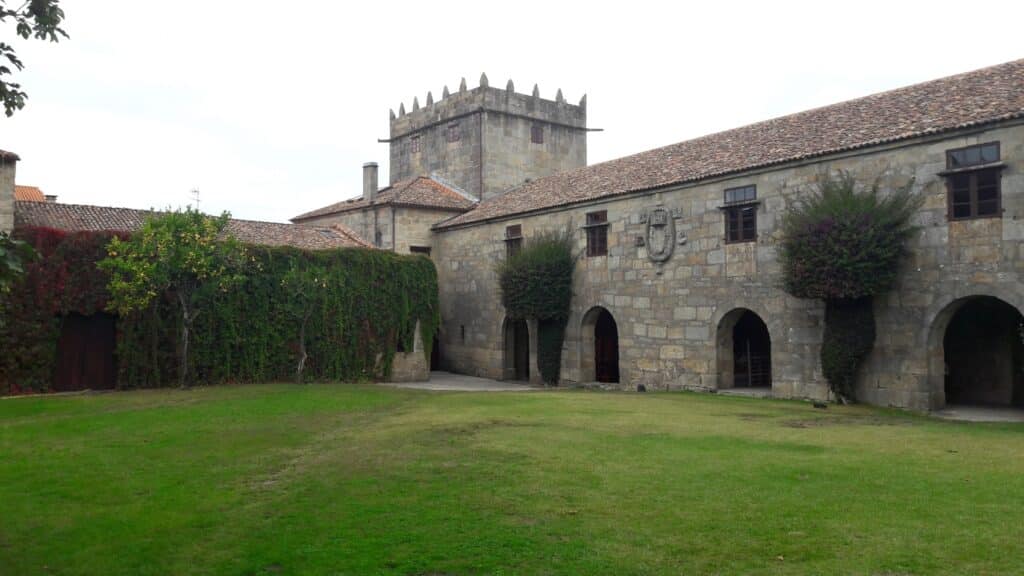 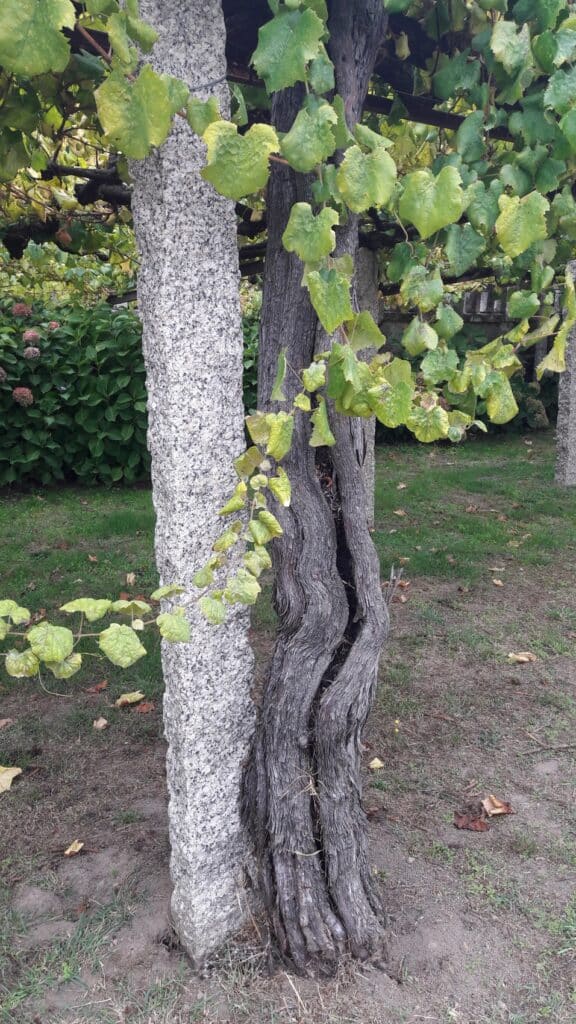 Again this is a winery whose wines I have known for many years. For quite some time it was thought that albariño-based wines should be drunk very young but I find the best ones are nearly always better after 2 to 3 years in the bottle. The acidity drops and complexity increases. I again was impressed by the wine that had spent time on the lees, the Fefiñanes III año 2014. This, as with other wines that we tasted, will improve with a few more years in the bottle.

We spent the night in Pontevedra, the provincial capital. The old centre like many towns in this area has lots of old granite buildings and is quite beautiful. We stayed at the parador which is pretty central and spent the evening on a tapas crawl. I took just one photo all evening of some wondeful scallops that we ate. 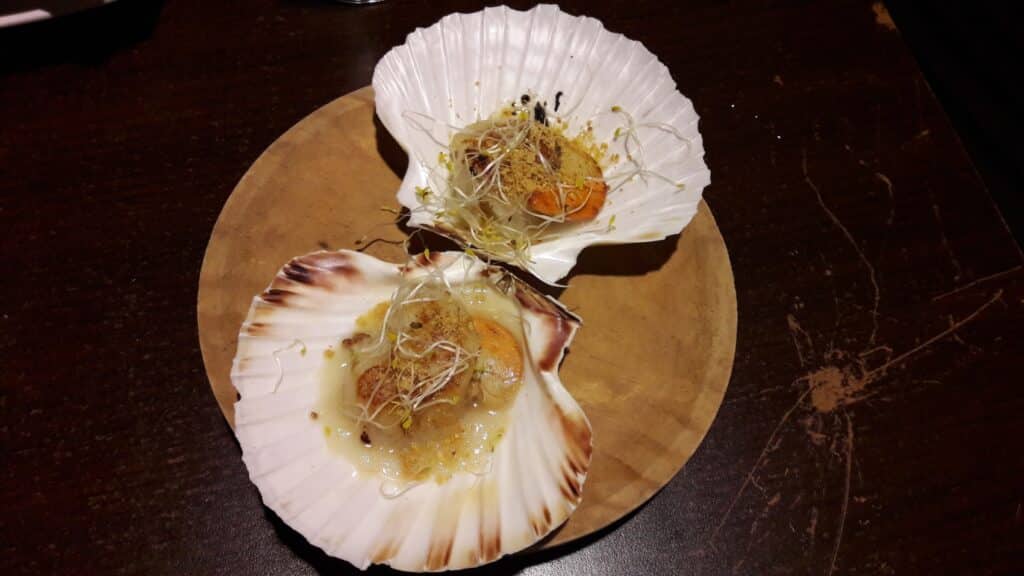