On the third day of winery visits we drove to the Valdeorras appelation which is famous for wines made with the Godello grape which have become popular over the last few years. It’s not as aromatic as the Albariño grape but has good acidity, often with aromas of citric peel and apple as well as floral notes. It can also have a slightly bitter finish. Amongst red grapes grown here the most popular is Mencia.

Our first visit was to Bodegas Valdesil which is run by the Prada family who have been making wine for generations. Soon after arriving we all jumped in a Landrover and were driven around some of the winery’s vineyards planted on the slopes of the valley of the river Sil. 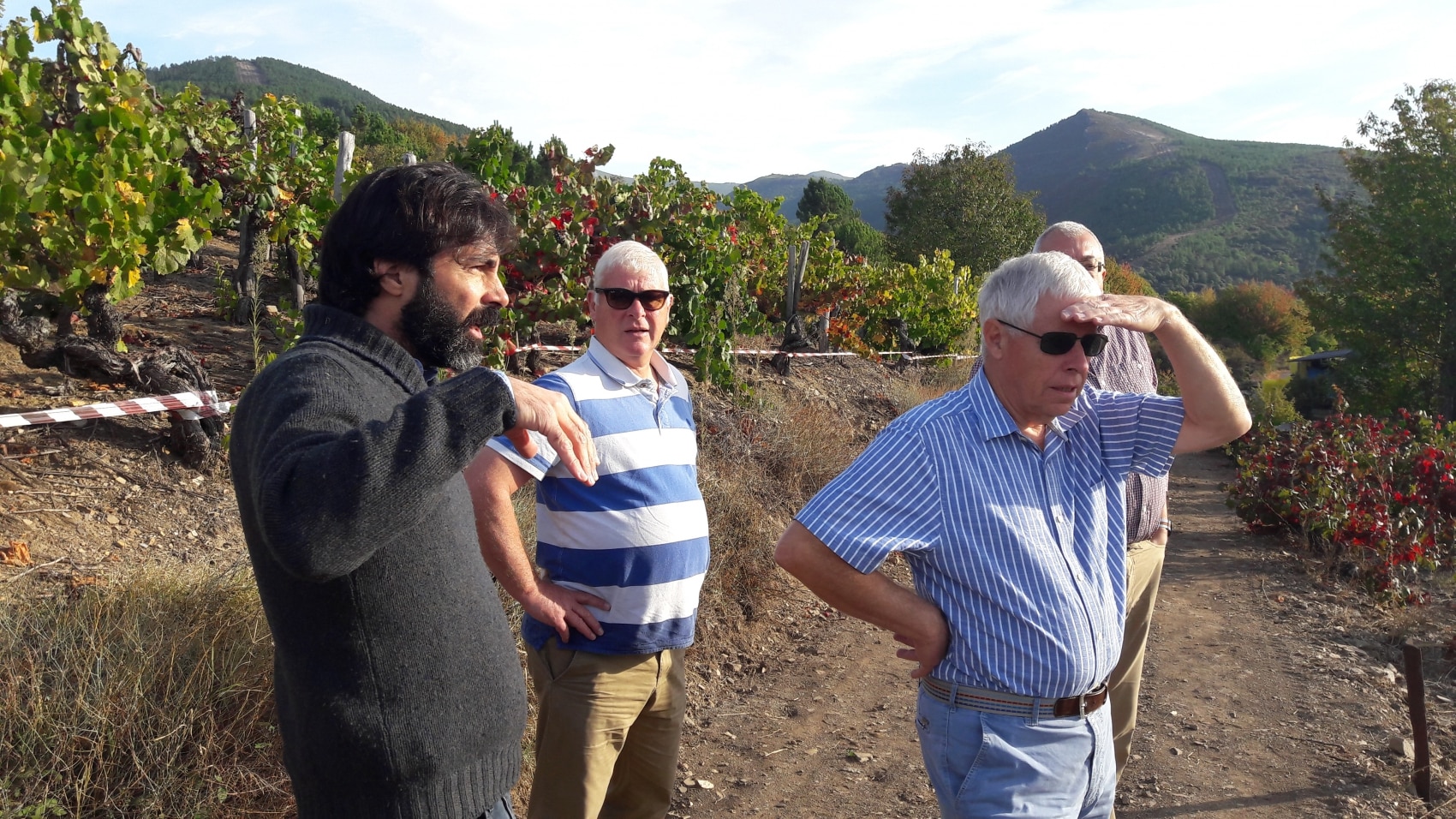 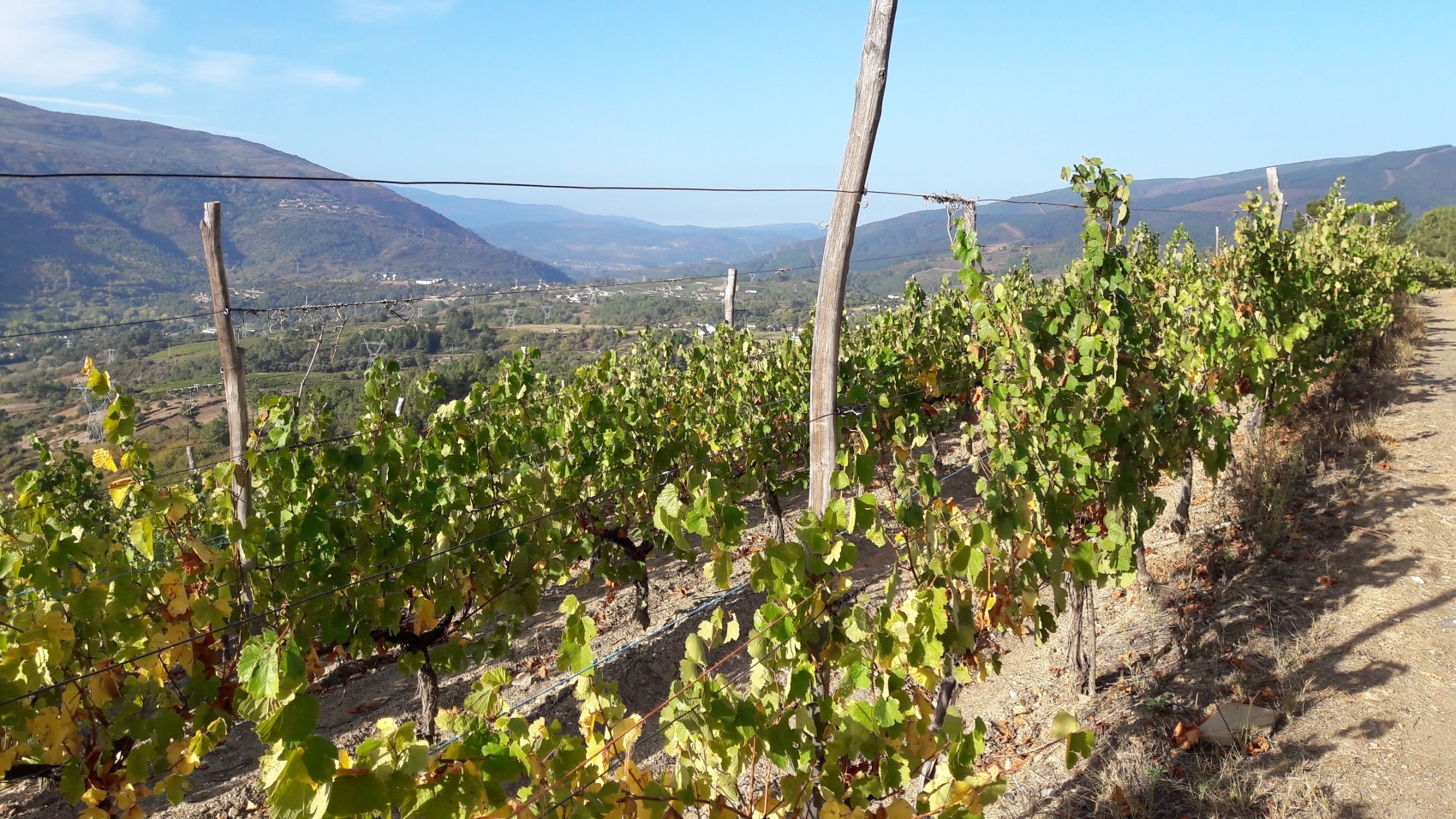 One of the vineyard sites that we visited was planted by the present owners’ great-granfather in 1885! At 132 years old they are the oldest Godello vines anywhere. It is also interesting that the vineyard is made up of just one grape variety, as it was normal at the time to plant  field blends of several different grape types. The gnarled bush vines are amazing as can be seen in the photos below. 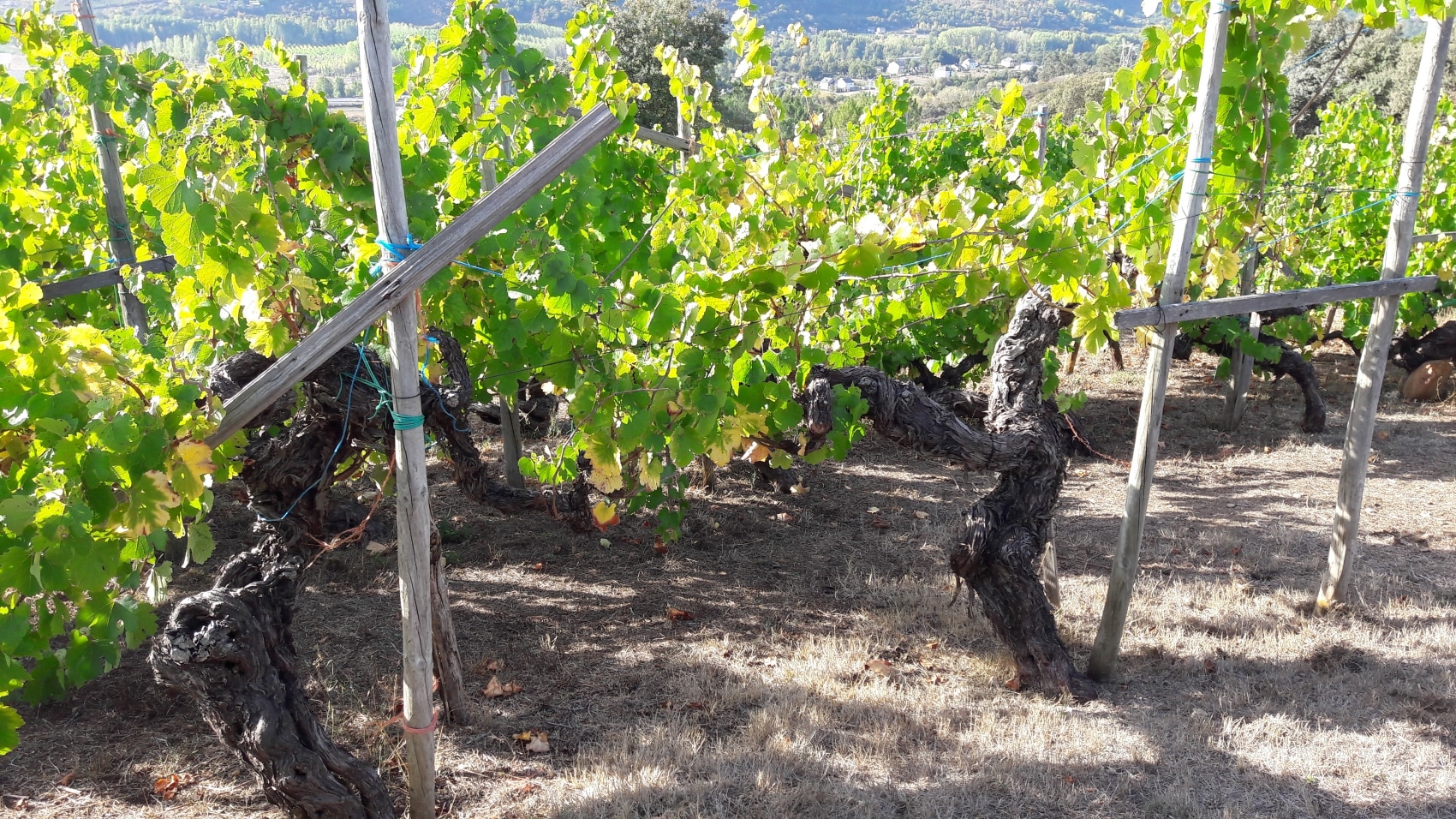 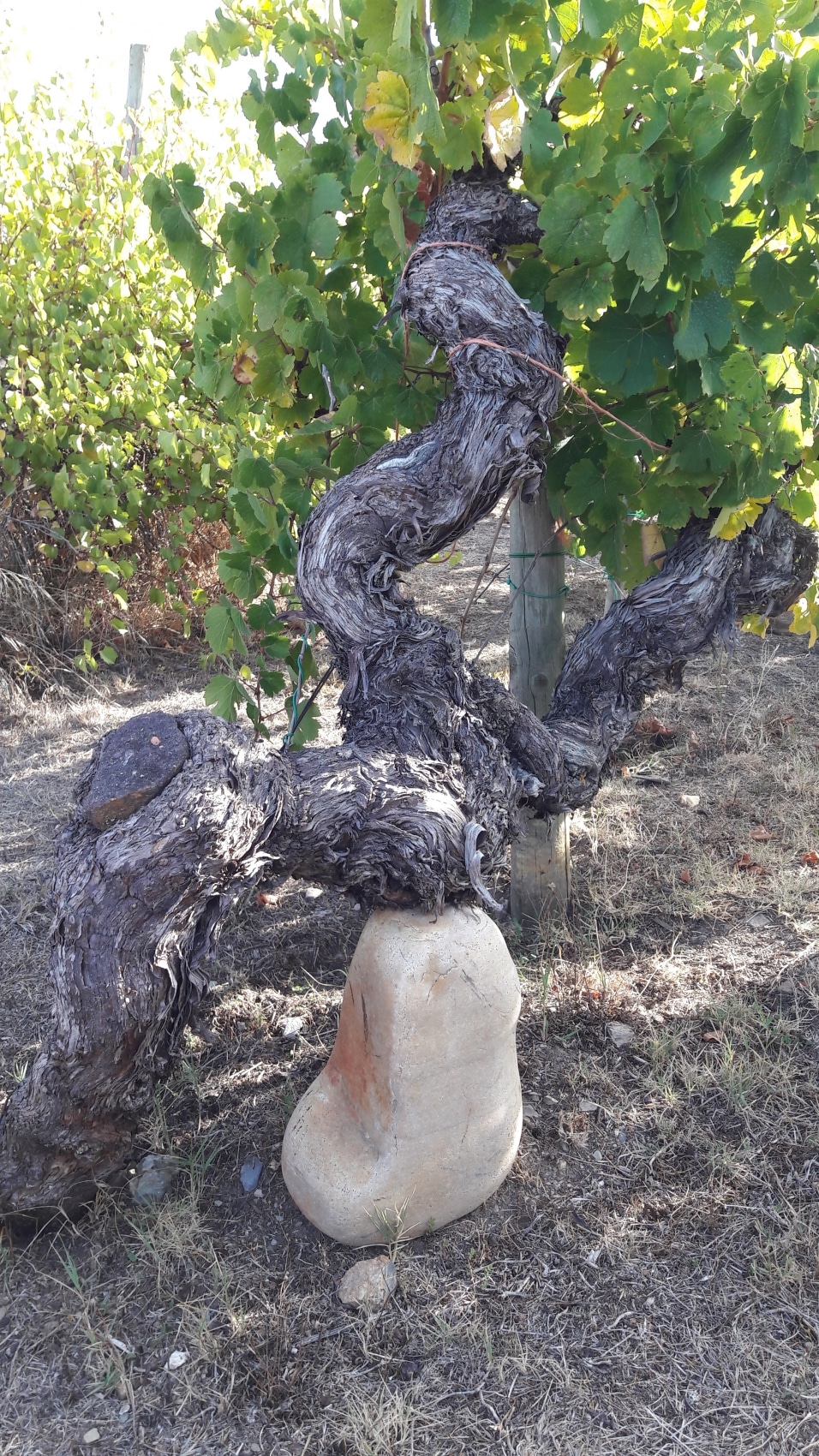 The location for the wine tasting was the best of all the winery visits we made, on a slate table built around the trunk of a holm oak tree! We tasted three whites, all 100% godello and one red made from mencia. 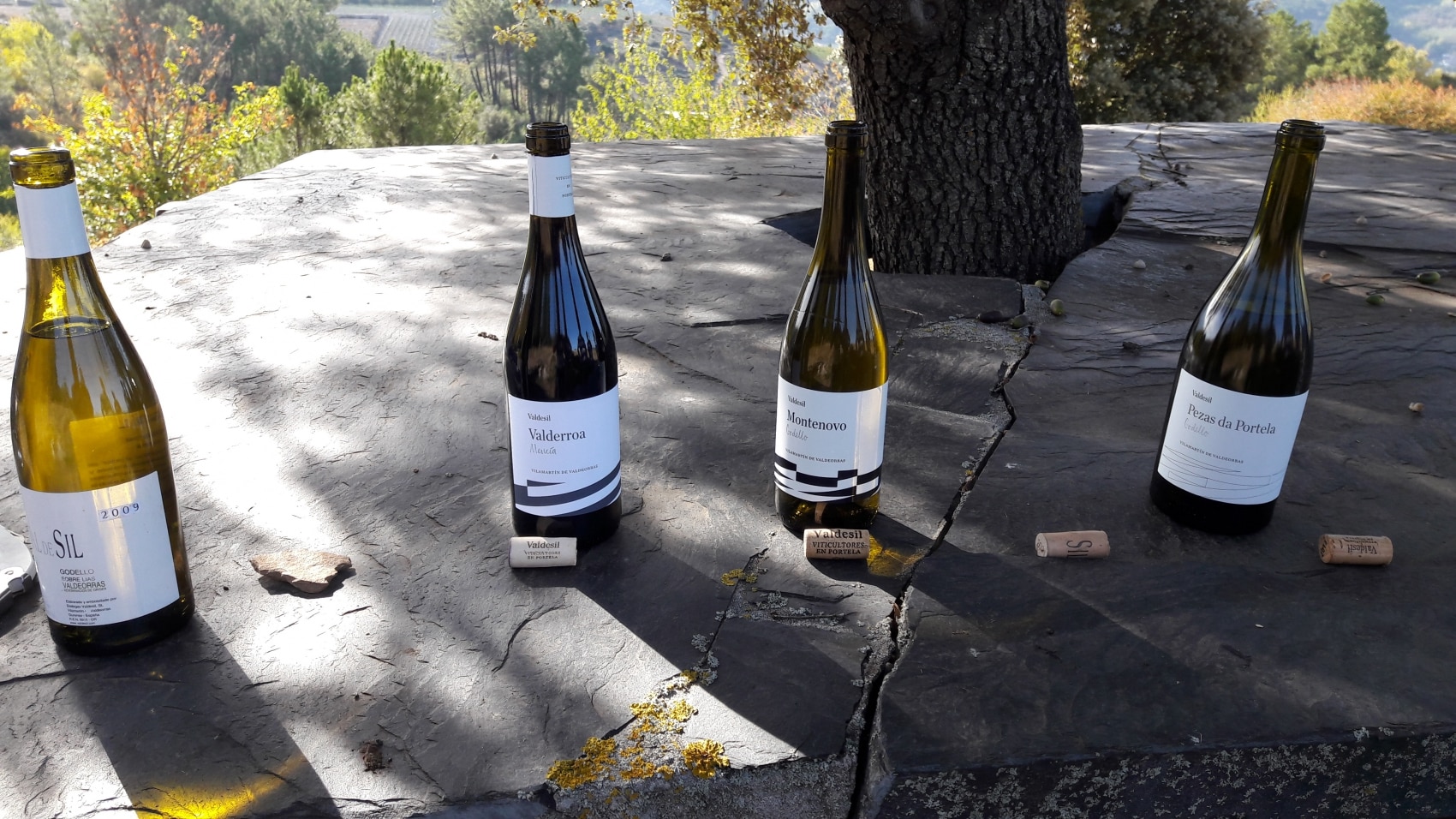 All the whites that the winery makes are very good from the entry level Montenovo upwards. What most impressed me in the tasting was the ageing ability of the Valdesil aged on the lees from the 2009 harvest. It still maintained good acidity and fruit but with a wonderful butterscotch finish. The red wine was fresh with lively red fruit, balsamic and herby, great for drinking in the summer. 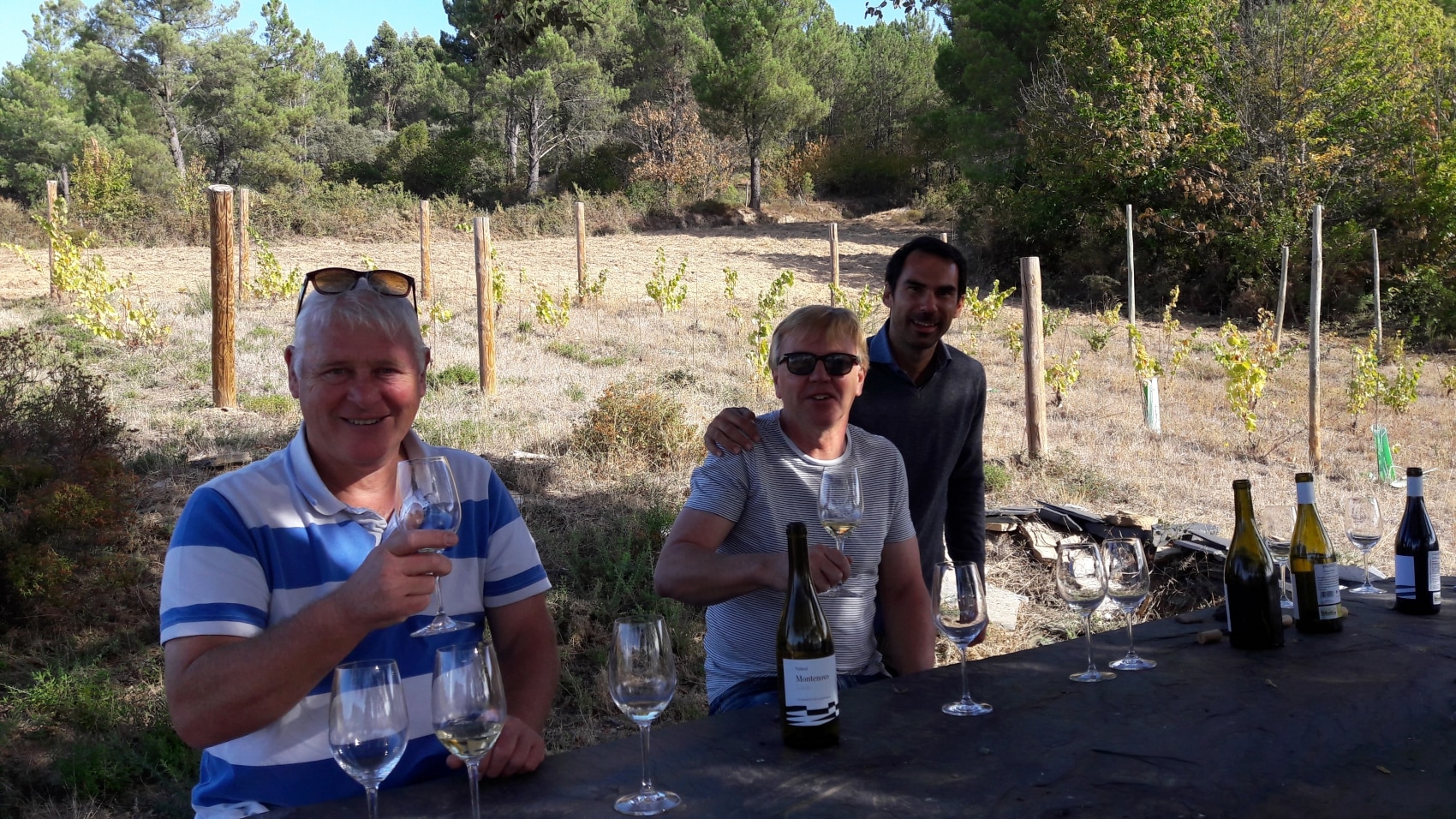 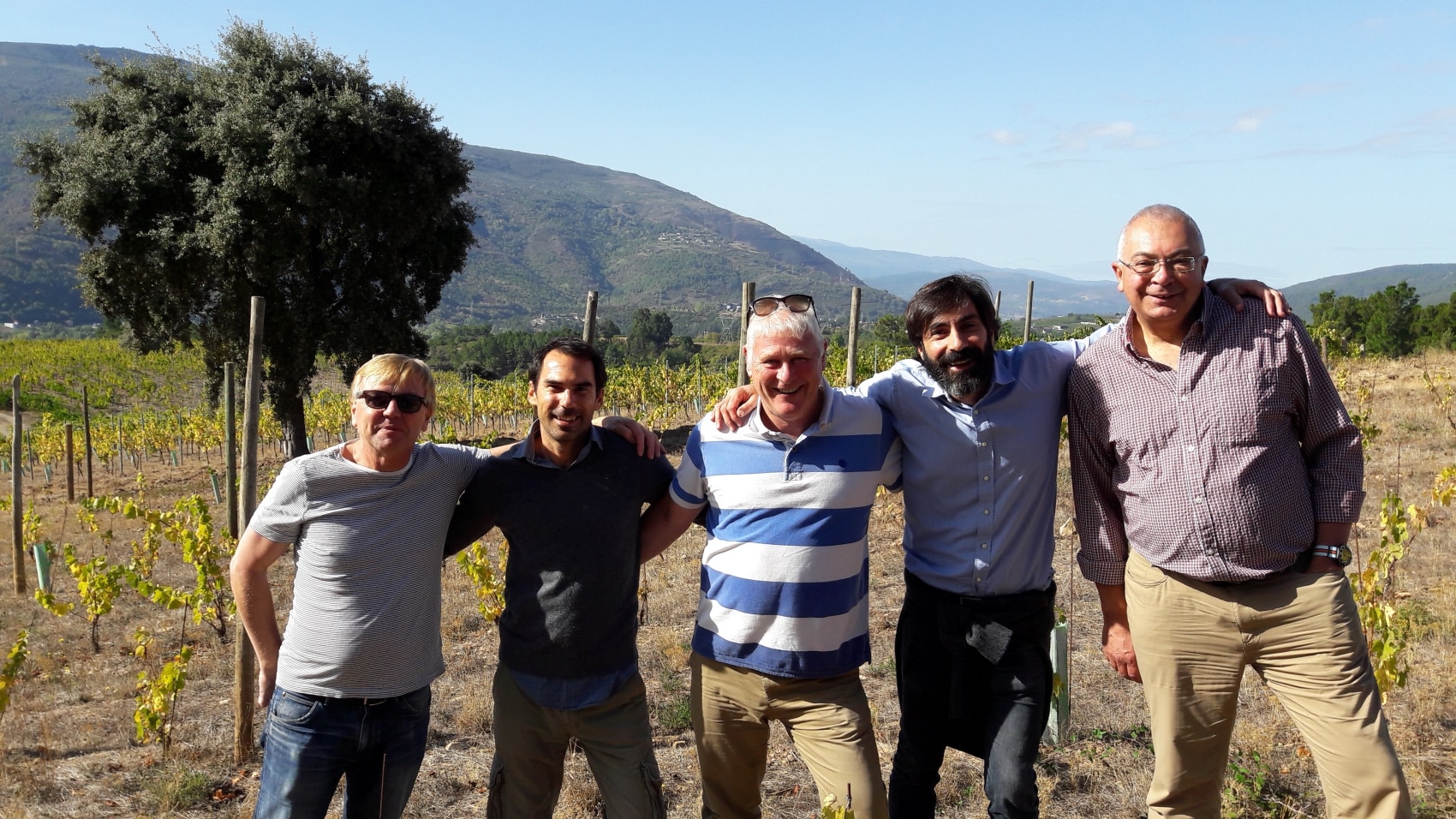 Our second winery visit of the day was to a winery in the Ribeira Sacra appelation. The vineyards here are planted along the valleys of the Sil and Miño rivers and are often on impossible slopes which means the grapes have to be grown on terraces. It’s common to see a rail system used to transport the grapes up or downhill. Growing grapes in these condtions is referred to here as “heroic” viticulture! Mencia makes up 90% of red grapes with 70% of white ones being godello and 18% albariño

The winery we visited was Dominio de Bibei. I have been drinking their wines for quite a few years, so it was great to finally see where they are made. The winery buildings are very modern and functional. In the first photograph below, if you look carefully you can see the winery perched on top of a hill. You can also see plenty of terraced vineyards 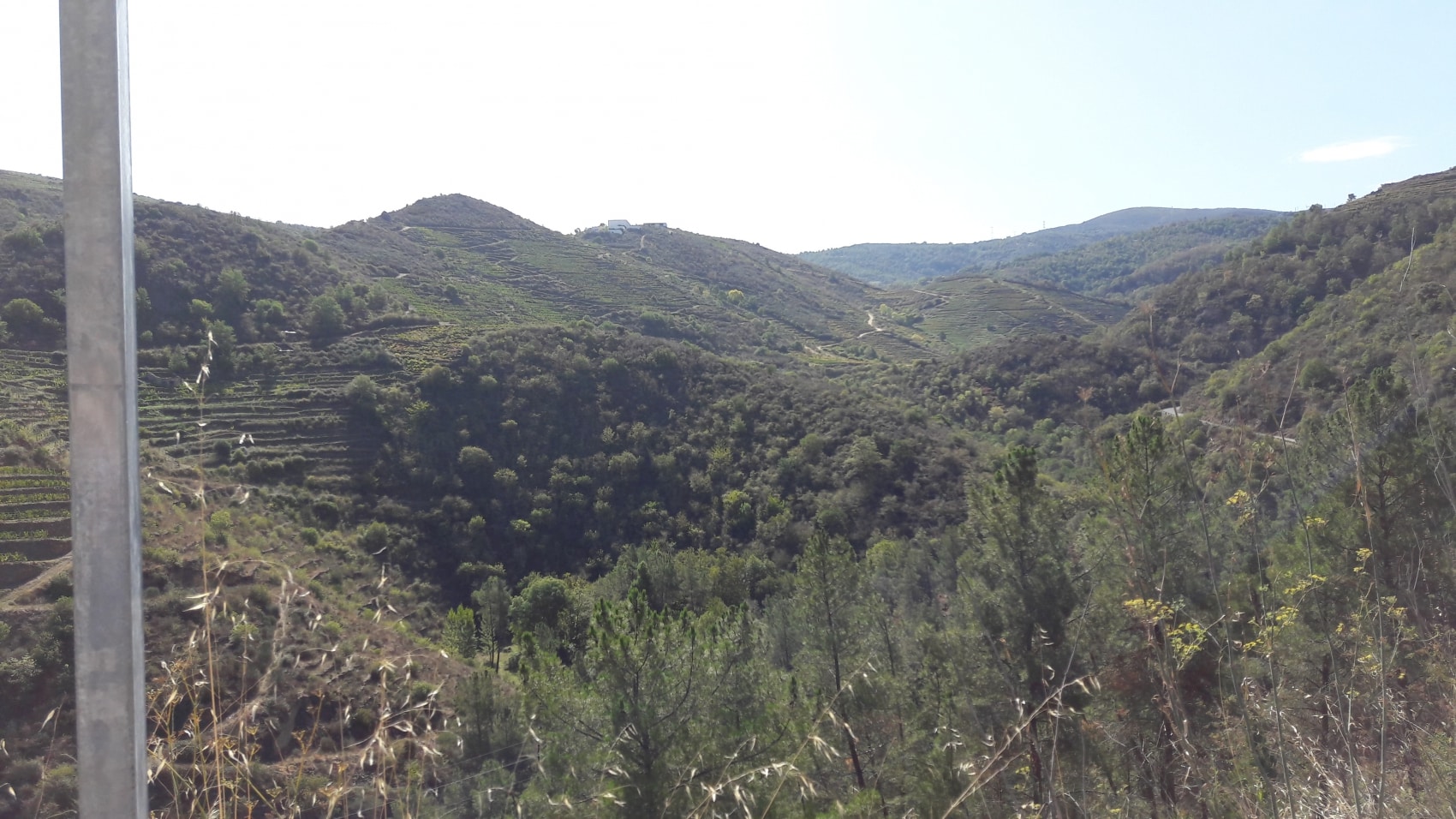 The winery uses troncoconical wooden fermentation tanks, concrete eggs and tends to age wines in barrels that have been used more than once. Using older barrels means the flavours from them are very much in the background. The use of concrete eggs for fermenting of ageing wine helps to give more depth, texture and volume to the wine due to circualtion. 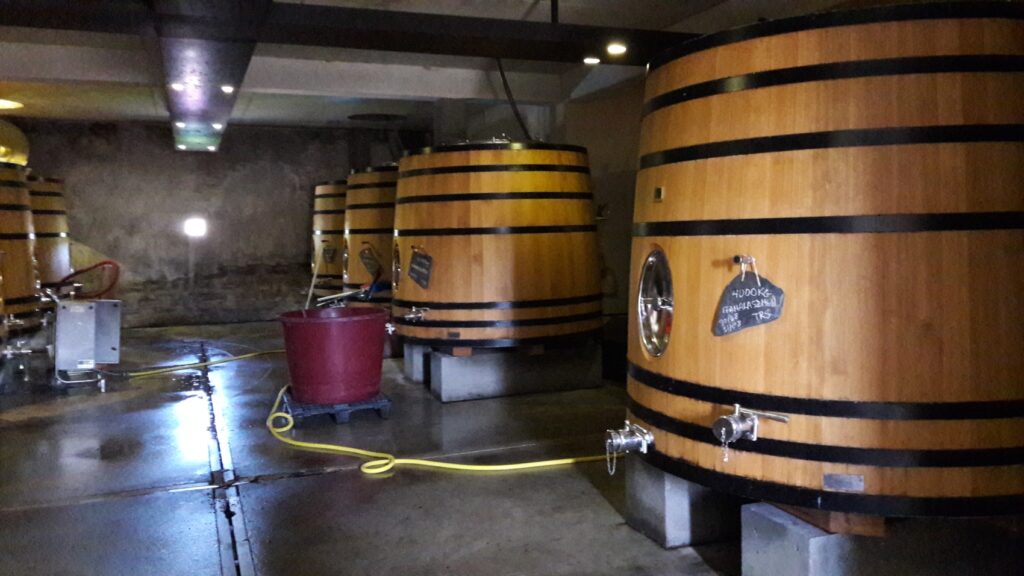 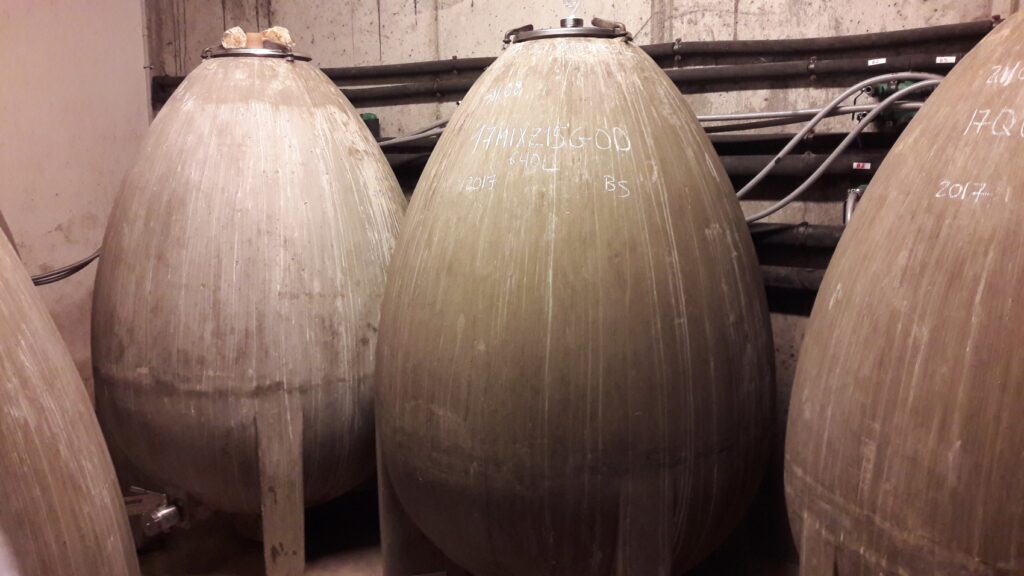 We tasted 3 of the wines that they make, Lapola, Lalama and Lacima. The first is a white wine made with 80% Godello, 15% Albariño and 10% Doña Blanca. The reds are both 90% Mencia. The white shows white fruit and notes of flowers and mint on the nose. Plenty of volume in the mouth with baked apple flavours. The Lalama has lots of red fruit, aromas of flowers and is quite balsamic. It’s also quite light. The Lacima has more dark fruit, is spicy and smokey. It tastes fresh and is also quite mineral.

After the visit we headed off for lunch with the people who showed us around the winery along with  two winemakers from Seville who were also visiting. Going along windy roads we ended up in a small village at what looked like a non-descript restaurant. We were in for a treat as we had a wonderful lunch starting with cheese and cured meats, This was followed by pork with small long green peppers (guindillas) and then pickled trout. There was a selection of desserts which had “orujo” poured over them and which were then flambéd. The meal came to an amzing 13 euros per person! 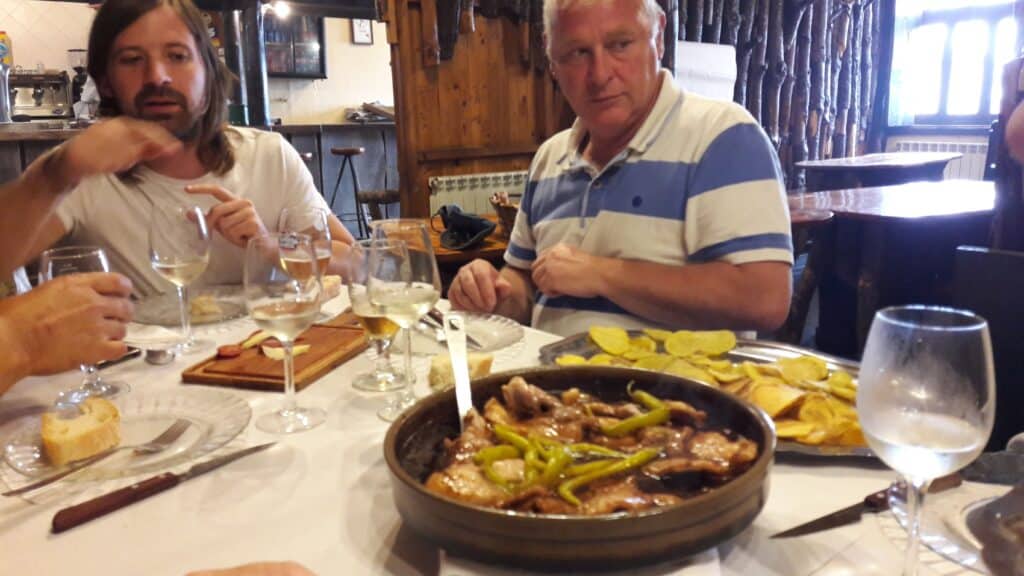 It was then back to Monforte de Lemos along a spectacular road after another amazing day.