Yesterday, I took some repeat clients on a tour to Sanlúcar de Barrameda, the second most important of the three sherry towns, the others being Jerez de la Frontera and El Puerto de Santa María. Sanlúcar is at the mouth of the river that runs through Seville, the Guadalquivir, and is, of course, home to manzanilla, the lightest of all the styles of sherry.
Well, on arriving in the town, we parked and headed for the local market, passing through part of the wonderful old quarter, including some beautiful squares, one of which can be seen in the photo below. 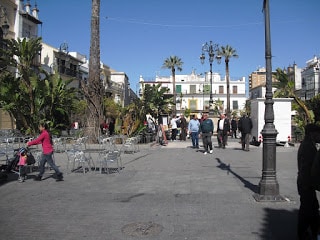 Just outside the market, it is very common to see people selling small shrimps, called “camarones” in Spanish. They are commonly used to make a kind of fritter which is very tasty. The photo below shows one of the sellers. 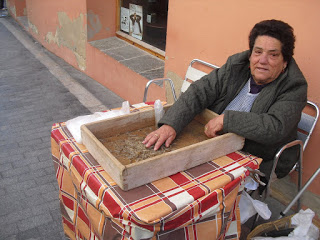 The market in Sanlúcar is a really bustling place with the locally-caught seafood the major attraction. Having said that, there is a lot of great local fruit and vegetables, as well. Below, are a few photos of some fish stalls. 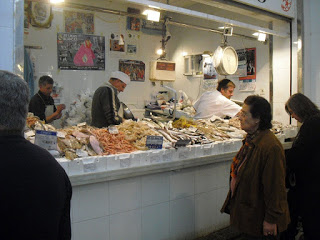 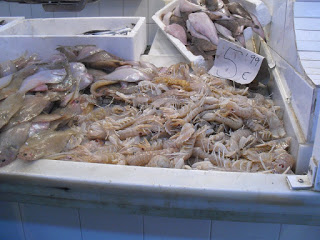 Leaving the market, we headed off to the winery where my friend Fernando was waiting to show us around. You can see him in the photo below with wine glasses and the cane for taking wine from the sherry butts at the ready. 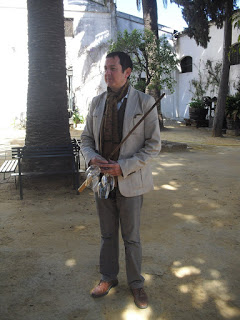 Everything that we tasted at the winery was drawn straight from the sherry butts. Below, you can see Fernando showing his skills with the cane as he pours the winery’s best manzanilla. Tasting this in its natural state before filtering or cold stablization is an absolute joy. For me, this is comparable to the tasting of any other really great white wine. It’s floral, yeasty, nutty, minerally, tangy and many other adjectives besides. 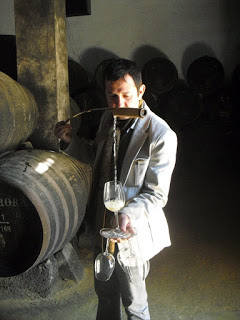 As you may well know, fino and manzanilla age in the sherry cask under a layer of yeast that protects the wine from the air. The yeast cells feed, principally, on the glycerol in the wine as well as any resudual sugar, making the wines some of the driest you can find. The dead yeast cells fall to the bottom of the sherry butt and over time decompose giving the resulting wine its characteristic taste and aroma. The photo below shows a sherry butt that has a section that can be removed to show the layer of yeast on the surface of the manzanilla. 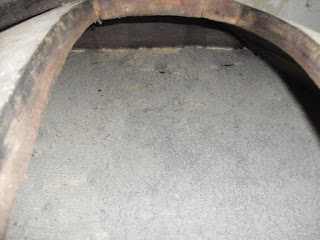 Heading to another part of the winery we tasted 3 VORS sherries; an amontillado, an oloroso and a palo cortado. VORS stands for Vinum Optimum Rare Signatum or Very Old Rare Sherry. All sherries in this category have an average age of more than 30 years. The wines as you can imagine were all superb, showing incredible complexity and length. These old sherries are kept in a part of the winery (see photo below) that once belonged to a Dominican monastery. In the middle of the 19th century a lot of church property was confiscated by the state and sold. Hence, the Dominican wine cellar became part of a commercial winery. 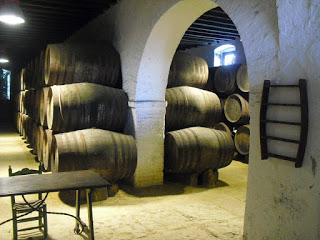 After the VORS wines we tasted some sweet ones. The first one was a bitter orange peel infused oloroso blended with sweet muscat that had been aged for around 35 years. This was not at all heavy, with the sweetness disappearing on the finish and the dry oloroso coming to the fore. The tour finished with an excellent Pedro Ximenez that had the typical aromas of raisins, prunes, figs and molasses, but also with notes of coffee and dark chocolate that come with extended ageing.
After what had been a fantastic winery visit we headed down to the water’s edge to an area known as Bajo de Guia. This is an old fishermen´s quarter which is now a place of pilgrimmage for lovers of seafood. There is a series of restaurants that look out over the water and all are great to eat at. We ate at the restaurant which is considered the best of all. As always, we were given a table with views out over the estuary as can be seen in the photo below. 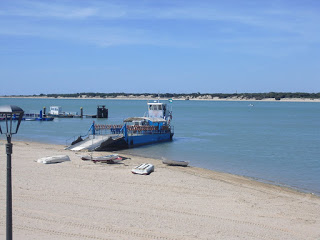 Among the dishes that we had were some small scallops, called “zamburiñas” in Spanish, and a sea bream that was baked in the oven with potatoes, tomatoes, peppers and onions. Photos of both are shown below. The food was accompanied by manzanilla ” en rama” which is unfiltered and comes directly from the sherry butt, just like the manzanilla we tried at the winery. 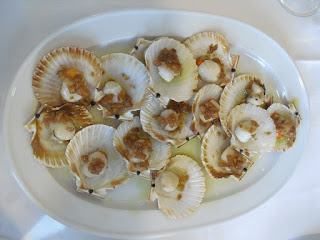 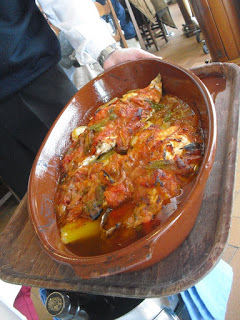 After what had been a fantastic lunch we took a stroll along the beach before heading back to Seville. I think my clients were more than satisfied with the tour; I know I was!