Cheese tour to the Sierra of Grazalema

One of the tours that I ran last week was our cheese tour. Unfortunately, it was raining a lot of the time so we could not walk to the farm to see the goats being milked. So instead, we stopped off at an olive mill before going on to the see the cheese being made. Anyway, when we go to the cheese maker’s they were just starting on their second batch of milk which had been put into a large stainless bath and was being heated to around 30ºC befor the curdling agent was added. As we would need to wait almost an hour for the milk to fully curdle we went and tasted some cheese and had a look at some cork trees. Arriving back my friend Rosana started to cut the curd as can been seen in the video below.

When the curds are about the size of a grain of rice they are scooped out using a sieve and are put into moulds inside a cheese cloth. 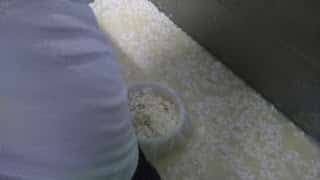 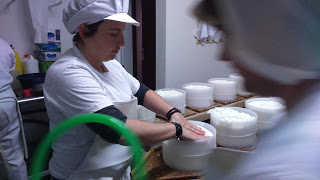 The cheese is pressed in the mould so that the excess whey is removed. The cheese is then left for around 24 hours, being turned over in the process. Taken out of the moulds the cheese is then covered in coarse sea salt before being taken to the curing room to start the ageing process.
In the photo below are cheeses that have been ageing for different periods of time with, of course, the necessary mould on the surface. 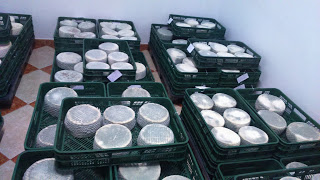 Cheese tour with A Question of Taste