On Tuesday of this week I ran a wine tour to Ronda, but before going to the winery that we visited we stopped off at Stenil de las Bodegas, which is on the list as one of the most beautiful villages in Spain. The town is built in and around the gorge created by the river that flows through it, the Guadalporcún. At the lower end of the village overhaging rock formations were created and have been used for human habitation for over 5000 years. It is possible to see where the stone is burnt from fires used over thousands of years. Houses have been built under the overhanging rock giving them a specatacular setting and making the town an obvious attraction for visitors. 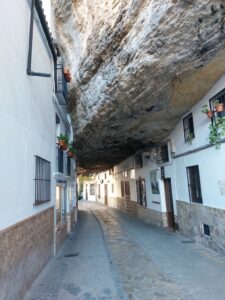 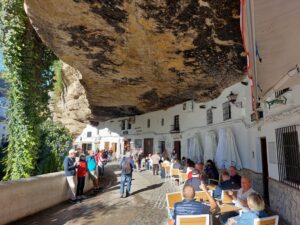 The winery that we visited just outside Ronda was Descalzos Viejos which translates into English as the Barefoot Old Men. The winery was the site of a Trinatarian monastery which was estabished soon after Ronda was conquered form the Moors in 1485. When the moastery suffered damage in an earthquake, most of the monks moved to another building in Ronda but the older members of the order stayed giving the place the name of Descalzos Viejos. The present owners bought the site 22 years ago and turned the ruined church into the main winery building. The surrounding vegetation benefits from a constant supply of water from a spring with an irrigation system that was designed by the Moslems who occupied the area for over 700 years.

Most of the vineyards that the winery owns are in the valley below the old monastery. They make wines from a number of grape varities including: Cabernet Sauvignon, Merlot, Garnacha, Syrah, Petit Verdot, Graciano and Chardonnay. The wines reflect the Mediterranean climate where they are grown. Weather permitting the wine tasting at the end of the visits takes place outside, next to or under an enormous avocado pear tree with magnificent views across the valley icluding part of the town of Ronda. 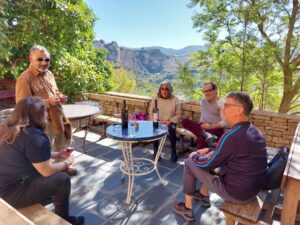