This last week, I have spent 5 days (9th-14th March) with a group of 16 people who were mainly students and staff from a culinary school in the United States. This blog entry is a small summary of what we did, which will hopefully give people a taste (no pun intended!) of our activities with larger groups.
We started on 9th March with an evening tapas tour. Unfortunately, I did not take my camera along and so have no graphic evidence. With 16 people everything was organised in advance, so each bar knew what we were going to eat before we arrived. It all ran pretty smoothly with lots of great food, including spinach and chickpeas, ham croquettes, Iberian pork cheeks, mushrooms with garlic and parsley, deep-fried tiny squid and a selection of Spanish cheeses.
On Wednesday 10th there was a morning walking tour of the Reales Alcazares, Barrio Santa Cruz and Cathedral with an incredibly knowledgeable local guide. Then, in the afternoon the group had a cooking class with chef Willy Moya. The class was all about Andalusian cold soups: gazpacho, salmorejo and ajo blanco. Everyone also learnt how to make some interesting variations on these: gazpacho with raspberry flavoured vinegar and chopped prawns, salmorejo with carrots, and beetroot gazpacho. Below is a photo taken at the class. 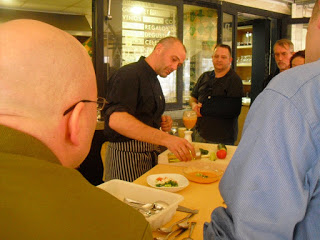 On the Thursday we went to visit wineries in Jerez, where authentic sherry, sherry vinegar and brandy are made. We went to a large winery with its great cathedral-like architecture and then on to a boutique winery, a great contrast. We tasted superlative sherry wines, brandies and vinegars in both places. Some of the wines and brandies were served straight from the barrels which is a rate treat. The photo below is of the tasting at the first winery. 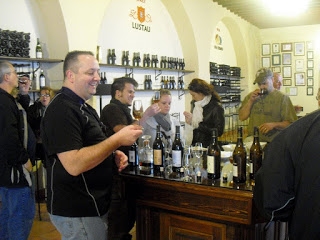 To follow are two photos at the second winery, where we were shown around by the owner. 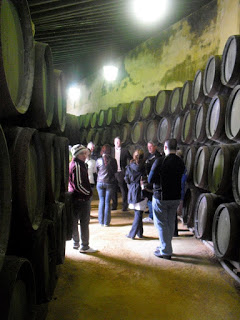 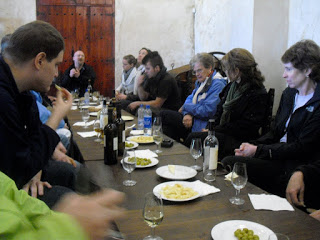 Well, everyone enjoyed themselves so much at the wineries that we forgot about the time. This meant that when we got to the excellent seafood restaurant in Sanlúcar de Barrameda it was already 3:45pm!
Friday’s tour focused on the Iberian pig. We started with a visit to a ham-curing factory in the small town of Jabugo. If you love fine Iberian ham, going to Jabugo is a kind of pilgrimage. Hopefully, the photos below will be enjoyed by all those of you who are able to eat pork products. 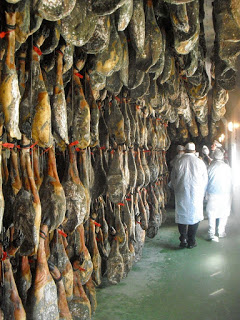 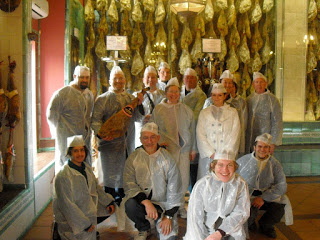 From Jabugo we went on to Aracena for a gourmet lunch of local products. Just from the Iberian pig there was liver with coriander, ribs, stewed cheeks, shoulder and loin. There were also vegetable dishes including asparagus and of course fine Spanish red wine. The walk up to the castle after lunch helped burn off a few calories!

The tour on Saturday took us first to an olive oil mill that produces a range of organic and non-organic oils. The mill which is situated outside the beautiful village of Zahara de la Sierra has been talked about on this blog before. Below is a photo of some of the group tasting olive oil with great local bread 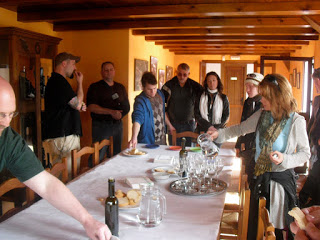 From the olive mill we went on to one of the boutique wineries close to Ronda. I didn’t take any photos there but you can see some in the blog entry for 25th September 2009. Anyway, the wines went down really well with everyone. We then headed on to Ronda for a specially prepared tasting menu at the Michelin-starred restaurant Tragabuches. This was a fine dining experience which put the icing on the cake of what I think was a great 5-day gastronomic experience. I can still taste the wonderful veal cheeks with carrot and ginger puree that was matched to perfection with a fantastic red wine from the Ronda area. 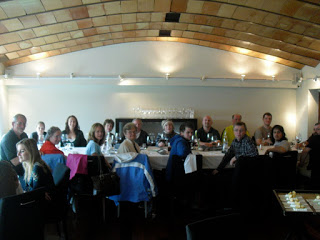