Yesterday we left Segovia and headed first to the Ribera del Duero wine region where we stopped at two wineries, both of which were founded in the early 1990s. Our first stop was at Bodegas Vizcarra  where the owner and winemaker Juan Carlos Vizcarra showed us around. He is incredibly passionate about what he does which made the visit even better. It is very typical in areas like the Ribera del Duero to find man-made caves in hills outside small towns and villages. Wine has been stored in these places for centuries. Juan Carlos showed us the cave that has been in his family for generations. He stores bottles from all, the vintages of his wine there. He owns 40 hectares of vineyards and we took a walk amongst some of them before touring the winery. 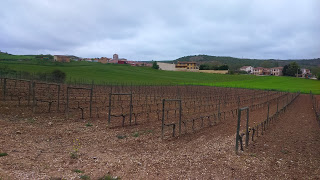 Juan Carlos uses no pumps to move his wine around; everything is done by gravity. This helps to produce elegant wines that drink well when young but have great ageing potential. We tasted 3 wines with the Torralvo 2012 being the favourite. It has a depth and complexity which I think will only get better as the tannins become smoother. It will be a cracker in 4 or 5 years’ time. 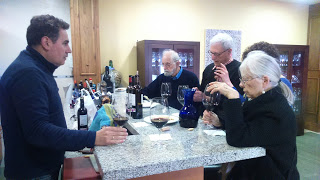 After only a short drive we arrived at Bodgas Rodero, a winery with a larger production but with the same philosophy as the first, the production of elegant wines. They own 120 hectares of vines which are mainly Tempranillo which is known locally as Tinta del País or Tinto fino. There is also a small amount of Cabernet Sauvignon and Merlot vines. The non-barrel aged wine and the wine that receives 9 months in oak are produced in a more commercial way with the grapes arriving in trailers wth no selection table, etc. The other wines arrive in boxes of no more than 15 kilos of grapes which pass along a sorting table. All movement of the wine is by gravity as it was in Bodegas Vizcarra. Again we tasted 3 wines with the favourite by a long way being the Reserva from 2012. The wine is very fresh with a depth of fruit and underlying spice from the oak which is well intergrated. This is great to drink now but will only get better in the next few years.
We then had a great lunch at a place called Mesón El Viso in the village of Gumiel de Mercado. Their house Ribera del Duero wine was very good. It was then on to Burgos for two nights
Food and Wine Tours with A Question of Taste Spain