Yesterday, we left Burgos and headed for the Rioja wine region. We started with a visit to Bodegas Miguel Merino. This is a small winery situated in the town of Briones. The winery sources grapes from the 11.5 Ha that belong to them. This means that production is small. The wines that they make are produced by either Miguel the father, who founded the winery in 1994, or Miguel the son. We tasted three wines, the Viñas Jóvenes 2012, a fruit-driven but very satisfying wine and then Vitola Reserva 2009 and Unnum 2010. The first wine is made by the father and is a more classical Rioja, subtle and elegant. The Unnum, made by the son is more vibrant, with greater fruit concentration and a spiciness from French rather than American oak. The general consensus was that we preferred the son’s wine. 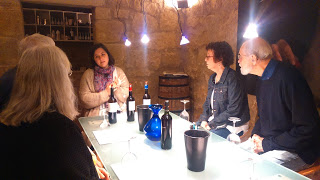 We then went to Bodega Contador. This winery was founded by Benjamin Romeo in 1995. For many years he was the winemaker at Artadi. The actual winery was built in 2008. Before that the wine was made in a garage! We were shown around by Rafael, starting with a visit to one of the vineyards. Thera are 50 Ha of vineyards with many separate plots of principally old bush vines. 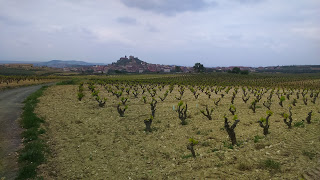 Everything in the winery is done in a scrupulous way. Harvested grapes have to be at the winery in less than 45 minutes. As well as a sorting table for the bunches, there is a sorting table for individual grapes! Barrels are bought from the best coopers in France. Benjamin also goes to tree auctions in France to select trees for the oak for the best barrels that the winery buys. I could go on and on describing the increible attention to detail that goes into making the wines. 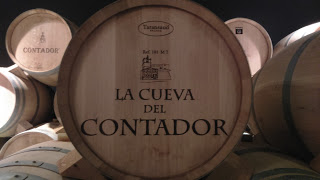 Well, we did a tasting of four of the winery’s wines, Predicador White 2012, Predicador Red 2013, La Cueva del Contador 2013 and Carmen 2009. All the wines were very good to excellent. 2013 was a difficult year some of the top wines were not produced and the grapes went to La Cueva. This wine has a profound nose of both red and black fruit and is mineral  and balsamic with the aromas from the oak being extremely fine. The wine has weight but great elegance and a wonderful mouthfeel. In a few years it will be very good. Carmen is a Gran Reserva wine with longer ageing in  barrels that have already been used for other wines. The wine is well-rounded with great integration of fruit and the other aromatic components giving a wine of great elegance and subtlety. 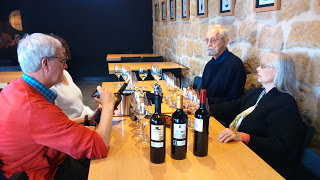