I received a text message yesterday morning from the olive mill that is near to Seville saying that they would be making olive oil that afternoon after a hiatus of 9 days. On arriving at the mill just before 5 p.m., they were just finishing picking olives. The photo below shows the last sack that of olives that would be processed that day. 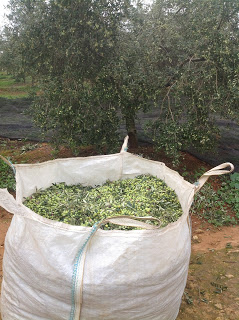 A photo that I didn’t take on my last visit was when the olives arrive at the mill. They are fed through a series of rotating cogs that remove most of the leaves as can be seen in the short video below.

Having reported on the rest of the cleaning and sorting process a few blog entries ago, we can go straight to the hopper which is filled with olives which will be fed into the milling machine. As you can see in the photo below nearly all the olives are still green with just a few black ones. 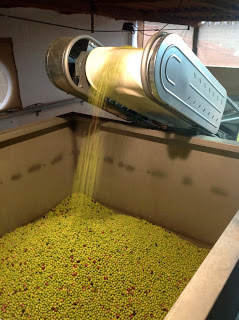 From the milling machine the resulting paste  goes into a “batidora”or malaxator which mixes it together slowly. This allows the oil drops to coalesce making it easier to extract the oil in the next step of the process. I didn’t get a good photo of he malaxator; the one below was taken a few harvests ago. 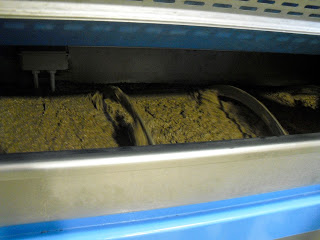 From the malaxator the paste passes to a horizontally-axised centrifuge which rotates at around 4000 rpm. The oilve paste which is made up of solid material, water and oil separates into its componet parts. The solid material being the densest moves furthest away from the central axis with the water next and the olive oil closes to the centre. The solid material and as much of the water as possible is siphoned off one way and the oil another. The centrifuge can be seen in the photo below, followed by another photo showing the oil coming out. 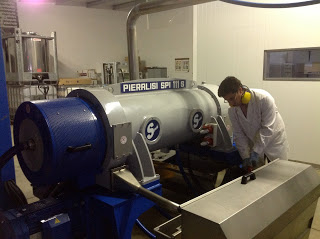 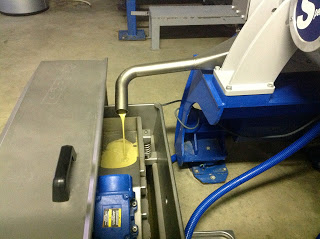 The oil coming out of the centrifuge still contains some water. To remove this, the oil passes through a vertically-axised centrifuge to which extra water is added to help in the process. Below is a short video showing the resulting olive oil.

The oil then passes to a settling tank where it is left for around 72 hours so that any reamining water or particles can settle to the bottom and be siphoned off. The oil is then transfered to the stainless steel storage tanks where it is injected with nitrogen which removes and oxygen in the oil and forms a blanket on the surface to protect the oil from oxidation.
Olive oil tours Spain