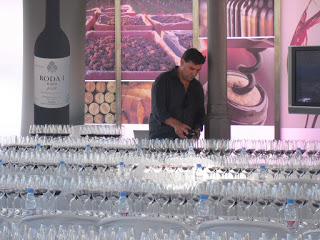 On Monday of last week (June 29th) I had the privilege of attending a superb vertical wine tasting in which all the Roda 1 wines that have been released on the market were tasted. Roda 1 has established itself over the last decade or so as one of the top Rioja wines and this was a fantastic opportunity to compare different vintages and to see how the wines were developing. As many of the wines are no longer available for purchase, except from private collectors, this was a unique experience. The tasting took place in a building called Naves de Barranco, built in the latter part of the 19th century as a fish market. It is now used principally for exhibitions organised by the local tourist board and there is definitely no smell of fish! 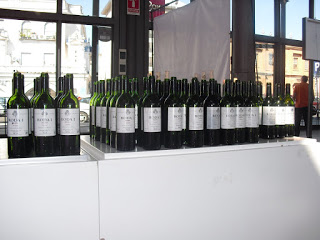 We tasted 13 different wines, comprising all the vintages from 1992 to 2005, with the exception of 1993 when Roda 1 was not made. The winemaker and director of Bodegas Roda, Agustín Santolaya, gave a superb presentation before he left everyone alone to taste the different vintages. After about 45 minutes he then commented on each of the different years and asked all the participants to name their three favourite wines.
For me there was only one vintage that I didn’t really like and that was 1992, which seemed rather dried out. All the rest had plenty of dark fruit and good tannic structure, which was sometimes a little austere as with the 1994. 1997 considered a lesser vintage in the Rioja produced a wine which was Burgundian in style and much appreciated by everyone. The 2003 in contrast, produced in a very hot year, was Mediterranean in style with notes of wild herbs and balsamic aromas. 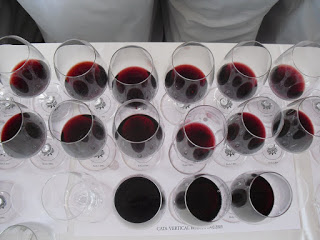 Unsurprisingly, the most voted wines came from vintages which had been declared as excellent in the Rioja, that is to say 1994, 1995, 2001, 2004 and 2005. Almost everyone’s favourite wine was the 2001. This for me was the star of the tasting. The nose was complex and elegant. almost ethereal. In the mouth the acidity, fruit and tannins were all in perfect balance with a long and again very elegant finish. This is not a massive muscular wine that impresses for the first five minutes, but a wine that evolves in the glass and that when the bottle is finished you crave for more. My second-choice wine was the 1995, which I have tasted quite a few times, the last one being in the winery a few years ago. This was very polished with silk-like tannins and probably has quite a few more years to go before it starts to decline. My third wine was a difficult choice between the 2004 and 2005. Both these wines need a few more years before they are at their peak. I found the 2004 a bit more closed on the nose and the tannins of the 2005 more rounded.
I plumped for the 2005, but both wines will be fantastic. 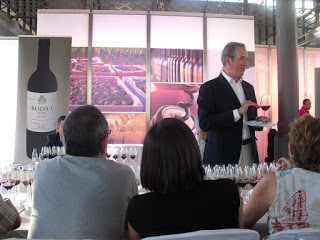 After we finished the wine tasting we tasted one of the extra virgin olive oils that are made by Roda, but from Catalonia and not from the Rioja region. The olive oil called Dauro, is made from three kinds of olives; Arbequina, Hojiblanca and the Greek variety Koroneiki. On the nose the olive oil has an incredible complexity of aromas which include tomato leaf, apple, artichoke, freshly cut grass, grated lemon peel etc. On the palate it is not at all aggressive with just a slight piquancy at the back of the throat. I have used this olive oil many times and is for me one of the top three or four olive oils in Spain.