Three days with a group of Australians

Earlier this week I spent three days with a fantastic group of four Australians, two of whom had been with me in 2012. I took them on a tapas tour, on my Iberian ham tour and a tour with a visit to an olive mill and to a winery where we had lunch.
The first photo below of some Iberian pigs was taken as it was raining. It was a relief to see some rain and to have a day with much cooler temperatures. 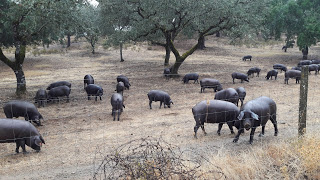 After visiting a farm and a ham-curing facility we went for a gourmet lunch which included a dish called migas. This is made with bread which is usually a day old. The bread is soaked in water and then squeezed to remove a lot of the moisture. Oil is heated in a pan and whole unpeeled cloves of garlic are added in addition to some pieces of chorizo and maybe pancetta. When the garlic starts to brown the bread is added and is stirred around until the moisture has gone and it is loose like large bread crumbs. Iberian ham can be added before serving as well as  fruit such as melon, grapes or orange. In the dish we had it was melon. 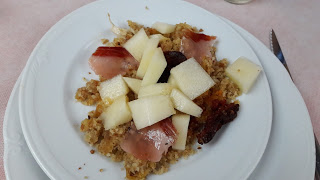 The last photo below was taken at the olive mill we went to the following day. 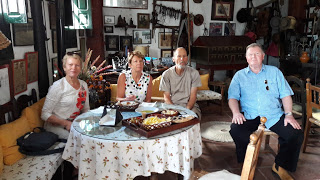