Today I was out again on another Iberian ham tour to the Sierra of Aracena. On the farm we visited today one of the breeding females had already given birth with the rest soon to follow. In the photo below you can see the mother suckling two of the piglets. 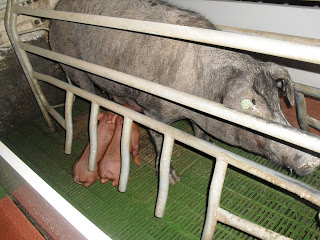 The sow in the next photo is next in line to give birth which will be anytime over the next few days. 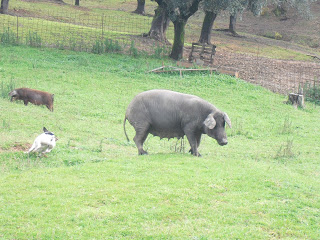 The people with me enjoyed a glass of local aguardiente called La Hormiga (The Ant in English) produced in the nearby town of Almonaster La Real. They are sampling the stuff with the mother of the person who runs the farm. She cut some of their ham for us to sample as well. 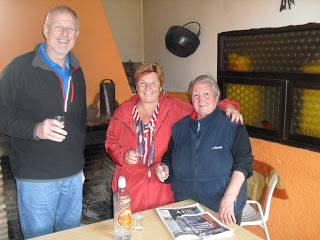 We then went on to the twon of Jabugo to visit one of the ham-curing facilities . I didn’t take any photos there but you can see some if you link to a previous blog entry here.
At the restaurant where we went for lunch there had lots of fresh asaparagus as well as  wild mushrooms called gurumelos,  or to give them their latin name Amanita ponderosa. These very tasty mushrooms are found in the south western part of the Iberian peninsula between Febraury and May. You can see the chopped up asaparagus and cleaned mushrooms in the photos below. 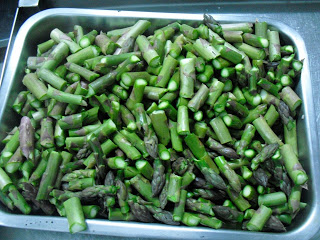 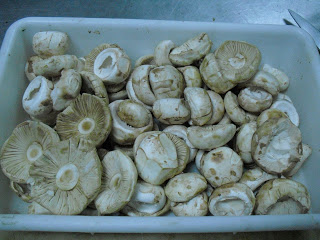 Gurumelo mushrooms can be eaten raw with some sea salt and olive oil. We tried them this way as you can see below and we also had them cooked with a little olive oil on a hot plate. 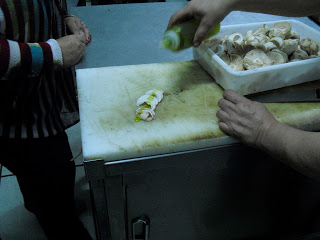 We had plenty of other dishes to eat; amongst them was stir-fried asparagus and 0 mushroom stems topped with slices of acorn-fed Iberian ham. Need I say more!